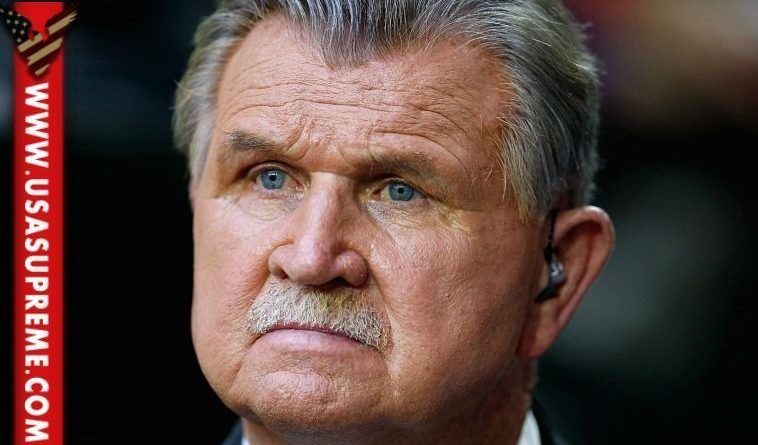 If athletes can’t stand for the national anthem then they don’t deserve playing football and getting paid millions of dollars in this country. These days it is such an embarrassing shame what America has turned into. Luckily, former American football player, coach, and television commentator Mike Ditka is known for holding American values close.

Two-time Super Bowl champion and two-time NFL Coach of the Year Mike Ditka said if one of his players took a knee during the National Anthem, they would never “play for me ever again.” The former coach of the Chicago Bears, also said that young players, such as San Franciso 49ers quarterback Colin Kaepernick, need to show respect for the game that has given them so much and stops “acting like a bunch of fools out there.”

Right on! Ditka has correctly identified the problem: athletes’ opinions are “no more important than anybody else’s.” And any player who disrespects this country in a public manner ought to be fired and not work again as a player. Why aren’t there more Ditkas around anymore??

Not standing for the national anthem is a sign of disrespect, which should never be allowed! What a player says or does on his own time, is his business. When on the field, it’s not his time. It’s his employer’s time.

What do you think? Share this article if you agree with Mike Ditka!

‘No No No No No’: Biden’s “Babysitters” Panics After He Arrives At NATO Summit And Has To Face Questions (Video)

Video: Joe Biden And Kamala Harris Who Appears To Be Drunk Debate Gun Control And Things Couldn’t Get More Weird

This Country needs more Mike Ditkas!
He has a simple solution to these overpaid immature varments!

The employer…the NFL..doesn’t care if this behavior continues. The 32 Team owners are the NFL. They hire a Commissioner to be the front man for them. So whether it is the Commissioner or the 32 owners that employ him, NOONE has taken the stand that the blatant disrespect for our country is prohibited in the owner’s stadium, while wearing the owner’s team uniform and in front of the owner’s paying customers. NOONE!!!

Not true.
Jerry Jones has. He’s told his players if they kneel they will no longer be a Cowboy. That’s the way it should be.

As a former coach–it would be unfathomable for me to even think to keep a player on my team that would even think of disrespecting (my) our flag or anthem–to many GREAT Americans Hero;s gave their lives for us –even to this day–for them to remain sitting on their ass so they can show us where their brains are– they are clueless—way to go coach Mike–

Love Mike Ditka “Da Coach” he a no Bullshit kinda guy says it like it is Players should not be able to continue to play if the can’t obay the the NFL League rulebook which clearly states what is expected of them regarding their presence on the Field and the National Anthem – Their Employers need to reread it too, Love My Country and What The American Flag Stands for and Respect All Who have and those who are Defending Our Precious Freedom – Amen

As a huge sports fan

I unequivocally agree that sports players have no right

disrespecting our US flag or our US uncorrupt elected dignitaries

be concern about running for their lives

and then come to found out that these professional sports player

are just as disrespectful as any terrorist terrorizing our USofA

while these sports player are performing their sports entertaining actions

Owners and coaches must penalize those that do not honor our hard fought traditions. Either fire them, don’t played them and fine them. It should not be tolerated under any circumstances. Onwners, coaches get some balls and what is right and patriotic.

We pay the sports “players” to entertain us, either by purchasing the Sponsor’s products or by going to the games! So, If a player decides to sit, kneel or not stand up for our National Anthem and our flag, as true American Patriots, we don’t want to watch them earn their millions by showing their disrespect for our country!

Thank you! I agree. Politics is a dirty game! If you are not dirty when you get there you will be after you’re there awhile! NFL should be a football team! Not a Soros team!

Thank you Mr Sitka , so nice to hear someone that has not lost their minds .Thank you for standing for America And our service people

Thank you for making a statement . It is not about issues nd protests it is about love for our great country by an act of respect for the flag a symbol of this great land. God bless you.

I agree with Mike Ditka. However, when team owners and coaches allow the players to take a knee and are defended for the right to do this, what do you do? Maybe the coaches and owners should be fined! Start from the top and hit them where it hurts. Then maybe things will change!