Road rage is aggressive or angry behavior exhibited by motorists. These behaviors include rude and verbal insults, physical threats or dangerous driving methods targeted toward another driver or non-drivers such as pedestrians or cyclists in an effort to intimidate or release frustration.

Wikipedia couldn’t be more precise in this case!

A couple of soldiers deployed in the Middle East put their own spin on a road rage altercation, to show just how badly it can end and to prove that shooting your mouth off when you don’t know the guy or gal in the other car isn’t smart. Or safe.

The video is actually dated 2018, but it’s only gaining traction online now it comes with the caption, “Agents in a Middle Eastern combat zone create a funny road-rage video with an inert law m72 rocket launcher. The launcher was recovered after being reported stolen.”

At the beginning of the video, one man tells the other, who is also shooting: “You ain’t gonna do s**t about it.” The altercation has already started and we have no way of knowing what led to it: maybe it was some minor fender bender that set the dude off, or lane merging gone wrong, or a more serious thing.

We don’t get much time to think about it, though: the passenger in the car with the camera picks up the missile launcher and points it at the black dude. “Imma blow this motherf***er to smithereens,” he says, as the black dude drives off scared.

The footage below contains graphic language that might offend.
Video below:

There are allegations that the man with the rocket launcher is an undercover military personal!
Now, this video may be old and / or too visibly staged to be properly entertaining, but it does speak to the harsh reality of these type of incidents. Pulling over next to someone in traffic to yell profanities at them won’t solve anything and might also put you in danger.

That person could be carrying a gun or a machete or have some other thing they’d be willing to use as a weapon, and you never know.

So be smart and don’t give in to road rage.

In any case the man who pulled up the rocket launcher should can get some jail time even if the weapon is fake!

As Fox News reported back in 2008 a Lakeland man has been arrested after authorities said he had a fake rocket launcher and a fake rocket projectile among his weapons arsenal.

The Polk County Sheriff’s Office charged Hiram Angus Melvin with possession of a hoax weapon of mass destruction, two other weapons charges and a violation of probation.

Detectives said that they found the device with a military shipping tube, a rifle and a silencer in the trunk of his car, and that Melvin admitted the weapons were his.

The State Fire Marshal’s Office, Tampa Bomb Squad and the Bureau of Alcohol, Tobacco, Firearms and Explosives were assisting in the investigation at the time.

OPINION: This article contains commentary which reflects the author’s opinion
Reminder: The purpose of the articles that you will find on this website, are to EDUCATE, not to disinform or grow hate and anger! 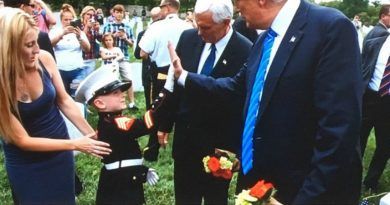 AAAHH the BATF another useless organization that must go.

The USA needs an all out race war to remove the subhuman vermin once and for all!

You can’t talk to a man with a shotgun in his hand. Or a Light Antitank Weapon, either!

I have a grenade launcher but I only use it for self defense and hunting.