Two Texas teens were thrown off their high school football team after they knelt in protest for the national anthem.

The two teens from Victory & Praise Christian Academy in Crosby, Texas planned the protest in advance — and even told their coach — who immediately asked his players to take off their uniforms and booted them off the team

Their coach, military veteran Ronnie Ray Mitchem, warned the boys of the consequences when they told him their plan to protest.

“There is a proper time to do something in a proper way,” Mitchem told ABC’s KTRK.

“I want this put on here,” Mitchem told the interviewer. “I have nothing against those young men. I love them.”

In the aftermath, Cedric Ingram-Lewis and Larry McCullough from Victory & Praise Christian Academy in Crosby, Texas said they were happy about the publicity their protest got.

Mitchem has stopped watching NFL games due to the players’ protests of the national anthem, meant to raise awareness for what they see as systemic racism in America.

“As a veteran I have a strong view of what I feel is disrespectful.”

This is what should happen to any player of any sport who disrespects the flag and our national anthem.

There are certain cultures in our country that needs to be corrected big time. This whole victimization crap and setting themselves up for failure only to blame others who had nothing to do with it whatsoever. Yea the country has been sick and tired of these punks of our great society that trying to take everyone down with them. It’s frustrating how the left is the cause yet we let them get away with it all.
Share if you agree with this coach!

WATCH: Libtard Maxine Waters Threatens To ‘Take Trump Out’ Tonight! This Might Trigger Code Title 18, Section 871 Threatening The President Of The United States Is a Class E Felony 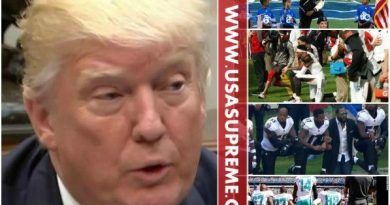 Boycott! Here’s The Full List Of Players Who Protested The National Anthem Today In Defiance Of President Trump

What have they done to have the freedom or right to protest? NOTHING! IT IS A GIFT OF FREEDOM DONATED AND GIFTED AT THE PRICE OF EVERY AMERICAN VETERAN WARRIOR WHO BELIEVED IN AMERICA, WHAT THE FLAG STANDS FOR WITH THEIR SERVICE AND IN THEIR WOUNDS AND DEATHS.

WTG coach – whole-heartedly agree with you!! A lesson needs to be taught; from the ground up. I’ve heard of pee-wee players taking a knee. Respect should be taught at an early age. Proud of you!

We’re with you, coach. So proud of you for having the guts to stand up for what is right. Never back down. God bless America! 🇺🇸🇺🇸🇺🇸

Should be a law passed if you disrespect this country you go straight to Boot Camp for the USA military .😎

So proud of you Coach ! The Coaches of all teams need to do this but they wont ! Thank you for your service and keep up the good work !