The NFL is now at the epicenter of the culture war. A backlash against traditional American culture is taking the shape of mass protests by NFL players taking a knee during the National Anthem. Conservative Americans are retaliating by delivering the NFL historically low ratings.

A Missouri bar is facing a wave of backlash online after using the jerseys of Colin Kaepernick and Marshawn Lynch as doormats at the business’ entrance. The owner taped down two NFL jerseys side-by-side, a Raiders Marshawn Lynch and a Kaepernick jersey, on the sidewalk just outside the bar’s entrance.

When the two are placed side-by-side it spells out “Lynch Kaepernick.”

According to Fox News:

Jason Burle, the owner of the bar, told KOMU he didn’t intentionally place the doormats on the ground in that order, but that he did decide to use the jerseys as doormats because he doesn’t agree with the NFL players taking a knee during the National Anthem to protest police brutality and social injustice.

Burle told KOMU “it’s not a race thing,” but many people are outraged by the display, claiming the arrangement of the jerseys was in bad taste.

Taylor Sloan, who saw the jerseys outside SNAFU, complained of the bar’s Facebook page about the uncomfortable word association.

The exchange between Sloan and the bar became heated, with Sloan accusing Burle of using the “faux guise” of patriotism to espouse “hate, violence and American racism.” He also said he didn’t believe Burle saw a problem with how the jerseys were arranged.

Regardless of accusations, Burle stood by the display because the NFL protests angered him. He said they’re his way of standing up for himself and his family who served in the military.

“A lot of us military folks take that personal to heart,” Burle said.

SNAFU was started as a way to give back to military veterans, says Burle. “We give discounts to veterans, we have a hall of heroes inside. We have flags that have flown overseas mounted inside.”

“I commend them for what they’re doing, as far as the right goes. I fought for that right,” Burle said. “The same thing that gives them that right gives me the right to place these out here.”

The owner of the S.N.A.F.U Bar at the Lake of the Ozarks just sent me this photo – he switched the order of the jersey doormat @komunews pic.twitter.com/ASFYCPsNQp

Real Patriots stand for out Nation Anthem, all others should be treated like doormats and that might even be too good for them!

Kaepernick hates this country and the country isn’t very fond of him either. Not about rights or race but pride and love of your land and its people.

Everyone should stand for our National Anthem and protest on their own time. In the end, it cost him dearly. 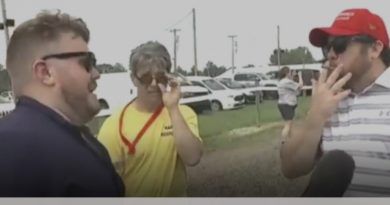 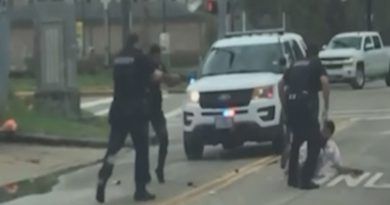 The Defense Presents Photos Taken At Different Angles, They Appear To Show Derek Chauvin’s Knee Was Actually On George Floyd’s Back

this is better than burning. gets the message across.

Yes it would have looked better wiping your feet 24/7 on those jerseys” Keep in mind “Did they take a Knee In solidarity On 09/11/2011 where Nearly 3,000 people died on that day? Yes the very day” The self aggrandising and lousy playing Colin Kaepernick started his Protest 09/11/2016 Yes it is about more then Patriotism its more then freedom of speech its more then Veterans. How many died in the cause he and Now the NFL are taking a Knee for?’ on the birth date of the loss of 3,000 AMERICAN Loved ones ? Mindless Heartless Idiots !