Well like almost every celebrity around, Hollywood celebrity Cher went too far and made some stupid comments about President Trump and our firs lady Melania. Well, it seems that this was not enough so she decided to pick on Melania and Donald’s son Barron Trump.

On Friday celebrity singer/actress Cher posted a tweet in the early morning hours, saying that the first lady always looks “sad” and “angry.” She went on and write that Melania and President Trump “NEVER Smile or Exchange Little Looks On TV,” and added that she even feels “bad.”

What was even more disgusting about her tweet is the part where she questions President Trump’s relationship with his son Barron by saying she’s never seen the President “hug, give buggies, or play with his son.”

Please pardon me for a moment… When is that charter plane loaded with the “celebrities” that promised to leave America if Trump won the election scheduled to depart? Is there one more seat available for this “Diva”?

Cher should not judge others marriages when her own did not work out so well! Melania is a well educated, reserved women and Cher is a loud mouth, sensation seeking as always has been. That is why Cher’s nasty tweet did not touch Melania at all as she boards Air Force one with President Trump and Barron to spend the 4th of July weekend in New Jersey.

However, it’s a shame that nobody can respect the president of the United States and his wife and family. Dragging him through the dirt all the time shows how disgusting these Liberals are. In a numerous of interviews Melania has said that when they spend time together, they’re very close and make the most of out of it.

What did you think of Cher’s tweets? Share this post if you think that First Lady Melania is classier than the liberal celebrities.

Walter’s “DON’T MENTION ACHMED” Made Everybody To Laugh!

Trump Appoint Hollywood Legend To Be The Head Of America’s Fitness, Sports, And Nutrition Council 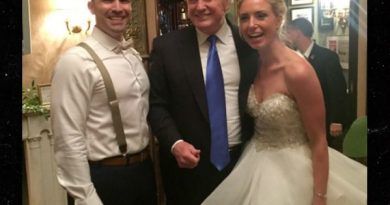 President Trump Crashed A Wedding At His Bedminster Golf Club!

where is that charter plane indeed. Remember what our mothers told us? That if one has nothing good to say about anyone it’s best not to say anything? Rude rude rude, all. Kathy Griffin, Rosie, Rob Reiner, Michael Moore, Maxine, Nancy Pelosi, Whoopi, Behar. And all the others that I’ve missed. Are any of these objections making it back to these haters and democratic creeps that seem hell bent on interrupting our government?

I remember Cher being with her daughter when she was a very small child. It was at the end of the shoe she and Sonny had. Cher went on stage with the little girl without her husband. I knew then that she was aboit to leave Sonny in the near future. You got nerve to talk about president Trump and his wife. Be better than what you think you are. Leave Baron alone, child abuser.

These “liberal” gangsters are sheep, desperate to remain in the security of the herd. Their MO of attacking dissenters to their agenda has backfired big time. These cheap shots at President Trump’s family are disgusting, showing the extent of their detachment from anyone outside of their circle of cohorts! Sadly, so many of them have been taken in by false reporting of Trump’s positions on gays and women during the campaign, and are reacting to nonexistent threats to the world as they know it. Many of them are dupes of the media. They need to be re-educated.
Best wishes for a happy Independence Day to the President and his family and all who stand with him!

Cher use to be one of my favorite singers. Today I could care less. Ever since her daughter, excuse me, son had the surgery she is a bitter woman. She tries to show her support but you can see it in her face and eyes she wish she had a daughter that they could go shopping for dresses and different styles..She is lonely. She needs grandchildren to dote on. If someone said something about her she/him child she would jump all over them like gravy on rice. She needs to think that way about others children. In other words but the shoes on her feet. Thought along with the others were not going to live in the USA if President Trump won? Never say you are going to do something if you’re not. If you can’t show respect to the choice of the majority choice leave. You and the rest who speak against the President are only looking for publicity. If reporters and television would not say anything you said you would disappear into the wood works where you belong. along with the other no class idiots.

Take down names. Barron may be your bosses on day. He may be young, and he is, he may be helpless at this moment, but remember this, he will be an adult. He is being raised as a Trump and he will remember everything done to him and his family for years to come. Never Ever mess with the children and you should never talk badly about someones’ family no matter what. And when you do, say a prayer for your own family because you will reap what you sow. Sometimes making trouble to your own families.

Barron will grow up well loved, and well adjusted enough not to want to become a sexual deviant like your he/she kid????

I believe Cher is just a bitter Mom who finds it hard to live with the knowledge that she has a Son for a Daughter.

Cher of all people to negatively comment about someone relationship is a joke!!!!!

Why do these celebrities feel like they need to be disrespectful to our President and his family? The only thing they are doing is making themselves look like ineducated idiots. None of them have any right to talk about Trumps marriages. They need to check out their own pasts. The phrase ‘Pot calling the kettle black’ comes to mind. Except Trump and his family are respectable people.

All the Hollywood elitist should keep their big mouths shut. Most of them are hypocrites. The media continues to publish every evil word they say and I for one do not care, because I have no respect for most of them.