Whoopi Goldberg and her liberal talk show The View is losing rating with every new show so maybe it’s time for them to stop the act and quit! They know most of Americans hate them and will never watch them again! So they use Donald Trump and his family to gain popularity, which is not working because they use every opportunity to bash Trump’s family!

The View is now only hateful show that is sinking without a trace! That show went in the toilet when Barbara Walters left! It is now a trashy show that needs to be canceled. Joy Behar is a loud mouth with no talent. She has attacked Donald Trump since the beginning of his campaign but this time host Joy Behar took things a step further!

According to Gossip Cop, on Monday’s episode of The View, Whoopi Goldberg once again bashed Donald Trump with her liberal friend Joy Behar. This time, Goldberg reacted to Trump wanting loyalty from James Comey before firing him.

After the ABC talk show played a clip of the president talking, Joy Behar cracked, “Says the liar-in-chief.”

Goldberg also took issue with another part of Trump’s interview, specifically his suggestion his administration may do away with press conferences. Directing her comments at the president, she said, “God knows I don’t want to do anything to hasten your departure from office, freedom of the press, it is our right of the people, whether we put you in there or not, you can’t hide from us.”

Goldberg even warned, “You don’t want people taking to the streets coming to get you.”

Unfortunately for Whoopi and Joy, twitter users made it clear that they have no respect for her or her opinions.

@TheView Impeach are you crazy that won’t happen. Fake news again Whoopi. You need to go

Get rid of both Whoopi & Joy they’re both angry, full of hate and racist. Every time I try to watch this show it’s all politics no laughter just anger, and disgusting comments. If Trump wouldn’t have won the election I don’t know what these women would talk about.

I am disgusted that this group of “entertainers” has been able to use their platform to spew rhetoric against our President and all others who have a different outlook for our country. Whoopi and Joy, especially have been so very vocal and negative. This is not what they are on TV to do… I believe it is supposed to be an entertainment show!!

Video: Right When Fetterman Introduces Obama As A “Sedition Free” President, All American Flags Fall Over As If God Looked Down And Said “Not Today” 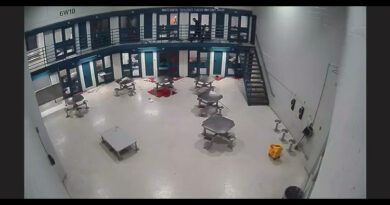 They are just angry old bitches

Whoopi is just a welfare mother with to much power, and a microphone… We put up with your choice, which almost destroyed our country for 8 years… SHUT THE HELL UP WHOOPI AND QUIT WINING…

These women are a disgrace to OUR COUNTRY. Please oh Please take them off the t.v. It makes me sick to hear their voices. I change the channel when they speak and it comes on, I can’t get to it fast enough to change it. Totally uncalled for.

These angry women are ignorantly rude and incredibly foolish… Yet will indorse Hillary Clinton the proven and actual criminal. This show is incredibly one sided disgusting and internationally embarrassing. We had a vote Donald Trump legally ran, he legally won and is now in office if you do not like it perhaps you will support a better candidate next time, but for now how about showing him some support or shut the hell up. He is our President and deserves our respect and support until he actually does something besides ask for two scoops of ice cream (yes that is how petty you guys sound). How can you sit on your high horses and treat someone you do not even know so badly… you guys are the worst and I have never experienced such flagrant rudeness to a individual for someone so self righteous. Simply bullies, you guys are the bullies you hate so much! Funny thing is you guys won’t have crap to say when Islamic Muslims take over perhaps mainly because you are on their payroll (sponsored by Islamic activist groups), but what about the children you are selling out as well, what about their future? Well, that is the question you must ask yourselves. Sleep tight.

Get rid of these dysfunctional women on the View and get some with class such as the White House now has class. Drain the swamp and no longer support ABC’s The View

Wait, wait…Didn’t Whoopie say she would leave the US if Donald Trump became president?
She’s as a real as her word.
No dignity, no integrity, no clue.

I wish everyone would stop watching the View,Maybe then it will be off the air for good. Obama was the worst President ever and those women raved about him . No one ever talked about how ignorant they were, Even though these women were ignorant, Joy and Whoopie are the worst kind of people to be on a talk show, especially in the daytime when children can watch how they have NO RESPECT for our President or our country.By the way Obama was NOT AN AMERICAN CITIZEN and NEVER should have been President, I heard his wife say so in an interview

Whoopie and Joy have so much hate in them, and they give their stupid ideas to the viewing audience, it is really wrong of them to spew this hatefulness of our President. R E S P E C T ladies…..how about it? You are what’s wrong with this country…not Trump. I think it should be a crime to go on TV and talk bad about the President of the United States! Time to cancel this idiotic tv show.

The View needs to Go, they are Pathetic and instigators of Hate. Trump is here to stay and that’s it, God sent to make good change for the better and expose the evil that’s been going on.

Didn’t know the view was still on tv. I thought that they were all leaving the country when Trump won. Whoopi and the rest of the panel are washed up and trying to stay on their cash cow as long as the democrats will listen. Me. Trump is our President. Deal with it.

I use to like Whoopi and Joy and now not at all . I wont watch the show any more and if they dont understand why ratings are going lower then their as dumb as they look every time they talk politics. They wanted Hillary in office . I dont understand why anyone wanted that nasty women which she calls herself in Office.

Hey Whooping-cough………weren’t you going to Canada when Trump got elected? Oh……just more hot air bullsh* t, just like your show. You and Joy-boy are the real fascists here.

wpDiscuz
15
0
Would love your thoughts, please comment.x
()
x
| Reply
Send this to a friend