The only thing The View show does is constantly creating turmoil and fuel fear in the people. We are getting used to the hate that The View show hosts keep spewing every day. But what was just said about Donald Trump was so vile, that will make your jaw fall out!

Joy Behar did something shameful and pathetic when she attempted to spread unsubstantiated gossip regarding the mental health of President Trump. She then did something that nobody expected: she speculated about Donald and Melania Trump’s sex life.

“You’re not being funny about that, you actually do think he’s losing it,” Jedediah Bila asked.

Now sounding more and more like a soothsayer Bila proclaims; “He wanted the fame. He wanted the fame that came with it, he thought it would boost his popularity but he was not prepared for this.”

At this point, Behar pushed it too far saying: “It’s also possible that Melania is living in New York most of the time. And he’s in Mar-a-Lago, and you know sometimes sex puts you to sleep. He ain’t getting any of that.”

With this, they only continue proving what insane lunatics they are, and that the people should not watch them at all. Why watch someone when the hosts of the show are total nutball liberal wackos who know nothing about anything.

They are perverted repulsive people that will say and do anything to degrade people that don’t agree with their sickness. This is why the show needs to be shut down!

What do you think did she cross the line this time? Share this article if you want to express your dissatisfaction with the show! 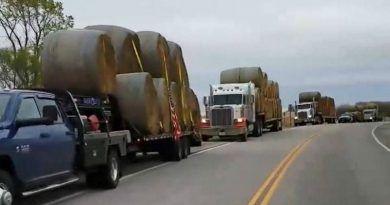 Americans Helping Americans That’s What This Country Is About

GONNA VENT HERE. I don’t need your negative comments either!
NEVER, EVER in my lifetime have I ever seen or heard of a President being scrutinized over every word he speaks, loathed by the media and then left to the point of wanting to hurt, slander, ridicule, insult, lie to and about, threaten to murder him, threaten to rape our Beautiful First Lady, and have his children also insulted and demonized, even at 10 years old.
I am truly disgusted, horrified and embarrassed by the people who are perpetuating this vitriol against our beautiful country and our amazing President.
I am disgusted at the ruthless, hating, cruel, non stop Trumpofobian people who have no moral compass or conscience and feel they have the right to say and do the things they are doing in the name of politics. This is hateful, ugly and horrific!
I truly wish I knew a legal way to fix the problem, I would. Every other President after they were elected and took the oath of office were left alone, they weren’t on the news 24/7 being dissected by every word out of their mouth, ALWAYS BEING PRESSURED to do this or that and never being given the support to do anything.
Every President in recent history has talked tax reform, border security, creating jobs, keeping companies here, strengthening ties with our allies, putting America’s back to work, improving our infrastructure, we hear about this for a week or two and it’s over – crickets after that.
With President Trump, his actions to put America First started long before he was elected and continues every waking hour for this hardworking American Patriot.
ENOUGH is ENOUGH is ENOUGH, LEAVE THE MAN ALONE AND LET HIM DO THE JOB AMERICANS ELECTED HIM TO DO FOR HEAVEN’S SAKE!

I wonder what the stink would be like if they all were on their period at the same time? No wonder they have a problem with no breathing. The just keep talking so they cannot smell the stink.

When have they Not stepped over the line..this show is illegal all it does is incite hate and threats towards our President. Since when did our country legalize the funding of its own televised terrorists group against the POTUS? End ALL television..radio..and internet programs that support the demise and hate towards The President of The USA!

They need to go never liked it always bad gossip they talk over each other and their quest and so you can never hear anything g anyone says and have gotten worse!!!!!! Glad to see them pull the plug Blah Blah Blah

Joy is the most disgusting pig on t.v. Can’t stand to look at her ugly face. And when she opens her mouth her voice sounds like a nasal mouse from New York. Horrible. Wish she would just disappear.

It is very unfortunate that no other side gets a chance to rebuff the stink that Woopie and Joy spew with no facts.

I agree these women spit hatred like snakes. Joy can’t have a period she has already been through menopause, this maybe half her problem.

It’s sad they go to this level .karma is a bitch

It is and always has been a stupid show that needed to be shut down seasons ago! I do not watch it. Women trying to be tough….

The View should keep repeating crooked Hillary LOST and Trump is now the PRESIDENT of the USA.
It looks more like Joy Behar and Whoopie have not been laid in years. Seriously, just look at them….now take another look.

A cancellation is way over due.

I watched the show 1 time and still wonder, “Why in the world would anybody want to see those losers???

they always cross the line, what line? They laugh at all the insults they say about the President and his family. They have no respect for anybody especially the Trump family. They are jealous cause they are all ugly and it burned their butt that he won. They cannot go forward. It’s 6 months and they’re still at it. Sick b……!

Why do the Television Excecutives keep allowing this vile show to aire , where are the censor , who oversee the content of television shows? These women should be fired and be banned from ever working on television again !

There are no censors that are objective, and the executives are all part of the leftist media. There’s no stopping them, they’re loving it!

We all know that their producers are just as sick as they are and really I find it difficult to look at Whoopy she is so ugly it should be outlawed. They all have the IQ OF A BEER CAN lucky for us the tv has a button that turns it on and off mine goes off when they come on. Let’s all show them the majority won and thank God we have Trump can’t imagine having to look at crooked Hillary for 4 years.😀🙏

this view witches are bad person. they do not have moral at all. they are bad to the core.

These are the filthiest people on TV. I f it weren’t for Robin Williams, no one would have even heard of that scum bag Woopie.

Well, them saying HE has dementia is like saying Hitler DISLIKED the Jews…Every one of them has delusions of grandeur and feel that they speak for ALL of America… WRONG.. These bitches speak for themselves and its the most disgusting show on TV…. And I wonder when the last time Whoopi, Joy or some of the others had sex… unless they are doing THEMSELVES in the closet… Its about time this “SHOW” was taken off the air and replaced with some program that sells wonder pots, or all purpose cleaners… at least you learn something from those shows.

I seriously doubt that Whoopi Goldberg or Joy Beher even remember what sex is like let alone trying too “Analyze” the Trumps love life, The woman on the View are PATHEDIC!!!

Trump isn’t getting any sex?…….What would Joy Behar know about sex, NOBODY would ever stick their tool in that disgusting fat hole, unless it were a starving Somalian hard up for cash!

They always cross the line. They all need to get a real worthwhile life so they won’t be sitting around dissing everyone else. They are so yesterday.

This show is a forum for gossip and unsubstantiated innuendo. It has no reason to exist except to fill t v time and should be replaced with something that has value. The time of The View has passed since there is no longer a view just an unreasonable indictment of anyone they don’t like including the President of the United States.

The people that are losing it are the so called women on this show. They would not speak the truth if their lives depended on it. That is what I call stupiity. All I can say as much as they like talking about President Trump and his family, that they are giving some other poor soul a rest. All the spew are made up lies.