At Ukraine 24, the head of the military medical service talks about the fact that the order was given to castrate wounded Russian soldiers, because they are “cockroaches, not people”

All of this was also live on YouTube but they deleted the broadcast a few moments later luckily we have downloaded the video:

The guy who said this is Gennady Druzenko, a lawyer, Maidan activist, veteran of the War in Donbas and current head of the “Mobile Hospital” project:

They just hid the video of the live stream where he said this:

Are you dump? I told you i've watched the video on goddamn youtube and it was the exact same words and exact same narrative , there was no edits
And it was broadcasting on live video on their state media channel
What do you want more?

This act by some is an act of revenge for the 2014 conflict:

I'm afraid it's not, comrade.
Russian soldiers will get the same treatment they were giving to ukrainians.https://t.co/77MXqiim60

As a reminder, it’s a war crime to castrate wounded soldiers:

Geneva Conventions (1949)
Common Article 3(1)(a) of the 1949 Geneva Conventions provides that mutilation of persons taking no active part in the hostilities, including members of armed forces who have laid down their arms and those placed hors de combat by sickness, wounds, detention, or any other cause is prohibited at any time and in any place whatsoever.

Something does not add up about it. The guy is supposedly a lawyer and therefore intelligent. No intelligent person would admit to doing this on Live TV.

UPDATE: PDMS has released a statement apologizing for Gennady Druzenko’s ‘sterilization’ comments and also claims it was taken out of context 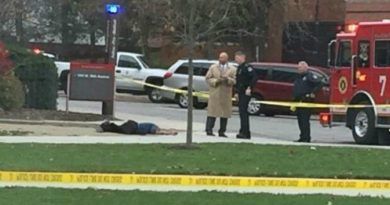 Melania Trump Destroys Mika After Morning Joe Host Launched An Attack On Her!

How about what Ukraine has been doing in the Donbas region?!?

First off this smells. Second, look at his picture in camos, the Ukrainian flag patch is upside down… no Ukrainian solder would allow himself to do that… not to mention the person taking the picture. This looks like an attempt at tit-for-tat, to get the Russian troops to do this to Ukrainian soldiers.

Time for Russia to end this thing. One way or the other.

Russian propaganda has a strange appeal to too many on the right. It’s deeply odd.

A totally FREE country that castrates POW’s? Let the Russians have them.

Not a bad idea. The Rushies bombed hospitals and children’s shelter. Remove their DNA from the Earth.

This is one of the main reasons I don’t suppirt the Ukraine. Humanitatian? Casterate the wounded? Deny the blacks and Jews the ability to relocate as refugees? Creating videos alledging Russin autocracies that were fabricated lies? Screaming “Peace, peace, peace,” and threatening WWIII. Pretty easy to see this is a Democrat Liberal operation. Sorry but I am not buying media hype today.

Loyd Austin and the rest of those rubes are desperate to make money with $$ invested in companies like his previous employer – Raytheon and the boys. The Chinese are desperate to get Russia and US/Nato fighting each other to degrade our military and take the focus off them in SC Sea and elsewhere. Biggest problem? The sheer incompetence and mental failings of the entire executive branch. Blinken, Austin, Bootyfagg, Hoebag, and the rest cannot get together and agree to anything – too stupid.