Video sent from a witness who appears to be sitting in a nearby truck shows two men, who appear to be exchanging gunfire. One is inside a vehicle, and the other is outside the vehicle, running towards it. Multiple shots can be heard in the video.

A dump truck driver was shot as two drivers were engaged in a road rage incident on Duraleigh Road on Wednesday, police said.

Around 11 a.m., police said a dump truck ran a red light which led the driver of a dark-colored VW Passat to follow the truck.

At some point during the confrontation, the dump truck driver pulled out a gun and fired at the VW, police said.

The driver of the VW then shot back at the dump truck – striking the truck driver in the leg, police said.

A witness video showed the shootout at a construction site between the two armed men.

One man is seen in the video getting into his car with the driver’s door ajar after walking away from a parked dump truck. Seconds later, as the man sits in his car, the driver’s window visibly cracks as shots are heard. A man appearing to step out of the dump truck is seen pointing a firearm and shooting at the car and driver. As the driver sitting in the Passat also draws a firearm, the two men exchange gunfire. Stokes falls over on the ground in the shootout.

The shooting occurred near the 4800 block of Duraleigh Road – which is just north of the intersection with Ebenezer Church Road.

The incident is under investigation.

Sylvester Stokes, 52, of Lucama was arrested and charged in the shooting, Raleigh police confirmed.

He has been charged with assault with a deadly weapon with intent to kill and possession of a firearm by a felon.

The victim had a legal weapon while the attacker had an illegal gun, the moral story of this incident is that you should never draw your weapon unless you are intending to use it! 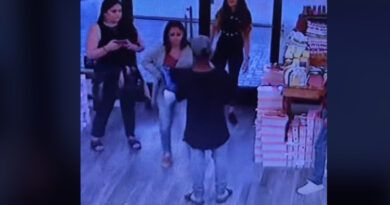 Video: Second Amendment Works – He Thought He Was Going To Walk Out With Free Stuff, She And Her Firearm Had Another Idea

First of all, nothing would have happened if Mr. Karen hadn’t followed the dump truck and shot his mouth off. He almost got his head blown off for that. Dump truck driver is guilty of attempted murder. If he wasn’t such an idiot, holding his gun like a thug from a rap video, he might have got a shot in and killed the other guy, and achieved what he set out to do. That would have been murder. Instead, it’s attempted murder–oh excuse me a “simple assault”–which means Mr. Dump will sit in jail for a month or so, then released and free.

When my career Soldier Dad would discuss firearms with us three boys in the ’60’s he’d say ” Never point a gun at someone unless you intend to use it.”

“possession of a firearm by a felon.” Now explain to me again how more gun laws and regulations will prevent this?

Ugh, they used it, both of them used their guns. Maybe we could have a better moral to the story. Like stupid people win stupid prizes!!

Felon with a gun. Do much for gun control.

Another black felon with a gun. Another one gone, another gone. Another one bites the dust. Victories like this come in quantities of one. Celebrate. Add it up, add it up, see what ‘ya got, add it up, oh yeah.

the gun the attacker had was not an illegal gun. what does that even mean?