Police said the officer was conducting a traffic stop around 11 a.m. on June 3 near the intersection of Bond Street and McDowell Road when another vehicle pulled up and a man armed with a hatchet got out and charged the officer.

The officer, who is a 22-year veteran with the department, fired six shots, striking 28-year-old Edward C. Samaan, police said.

The officer holds the shot man at gunpoint while waiting for police backup and paramedics to arrive.

The man, identified Edward C. Samaan by the DuPage County Coroner’s Office, was taken to an area hospital where he was pronounced dead.

The cause and manner of death remain pending further investigation, including toxicology reports, the coroner’s office said in a statement.

“Any loss of life is tragic, and our thoughts are with the family of the deceased,” Arres said.

The department began issuing body cameras to its officers last month with full implementation expected by the end of June.

Well, this man was perfect for getting the Darwin award!

The Darwin Awards are a tongue-in-cheek honor that originated in Usenet newsgroup discussions around 1985. They recognize individuals who have supposedly contributed to human evolution by selecting themselves out of the gene pool by dying or becoming sterilized via their own actions.

Video: Group Of Thugs Pistol Whip A 51-Year-Old Woman For Her Car, Karma Comes Fast And In Numbers

Videos: Man From Texas In The Front Line Alongside Russian Soldiers – He’s A Far-Left Stalinist Communist Not A “Right-Wing GQP Trumper” As The Media Claims 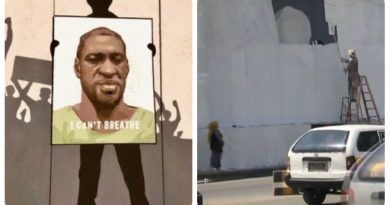 Photos: Woke No More – Taliban Paint Over The Gorge Floyd Mural In Kabul Days After Taking Control Of The City

Good outcome….
Anyone stupid enough to do something like that should get the same results.

So should any protestor, “peacefully protesting” against it.

Loss of life is tragic but this guy paid the price for his stupidity. Wouldn’t be at all surprised to discover the deceased was a member or follower of the leftist terrorist gangs.

Why is his face blocked out? F him. Just cruising around waiting to kill someone. Imagine if the guy was just a civilian and unarmed, he would easily have wound up dead.

So you see, we need to take all guns away, so some POS can kill us with an axe.

I wonder what his best case scenario was for this situation? If things would have worked out according to the plan, what would that look like?

Good shooting! No telling how many more crimes in the future that alert Police Officer prevented, and at great savings to the tax paying public.

Congratulations to the officer for being alert and able to survive an attack from a deranged individual, that many might not. I note that when the attacker’s car stopped, the officer placed his hand on his weapon just in case – and so he was prepared for what otherwise would have been a nasty surprise. If he had not been alert he might have been the dead one.

Any body crazy or just stupid enough to charge an armed man, cop or not gets what they deserve.

He was planning on surviving and getting rich from law suits… being a miss understood person? “I just wanted to stop police brutality against a fellow motorist”

Guess he wont be voting Dem this mid term.

actually he probably still will…..

The officer eliminated another thug from society, good for him.

1less lib dirtbag in the world.

Excellent gun control on display by the officer.