The NFL players become a bunch of grown men making millions throwing around a pigskin, spitting in the face of the person who gives them the ability to make fortunes from doing nothing that contributes to society!

President Trump today called for football fans to boycott N.F.L. games unless the league fires or suspends players who refuse to stand for the national anthem, saying that players must “stop disrespecting our flag and country.”

“If NFL fans refuse to go to games until players stop disrespecting our country, you will see change take place fast,” Mr. Trump wrote, on the second weekend morning in a row in which he vented over the issue on social media. “Fire or suspend!”

If NFL fans refuse to go to games until players stop disrespecting our Flag & Country, you will see change take place fast. Fire or suspend!

NFL players have defiantly reacted to President Donald Trump’s criticism, with at least 100 players kneeling, sitting linking arms, giving black power salutes and not even showing up for the national anthem out of protest.
Players from both the Baltimore Ravens and Jacksonville Jaguars were the first to protest by taking a knee ahead of their game at Wembley Stadium in London on Sunday morning. No players were kneeling during the playing of God Save The Queen – the British national anthem.

Really they respect the British anthem and not our own well below you can see the full list of the players who protested today and you can share this and boycott them!

While most players from both teams, Tom Brady among them, opted to lock arms, more than a dozen Patriots — including running back James White, wide receiver Brandin Cooks and Pro Bowl cornerback Stephon Gilmore — took knees.
In the owner’s suite above them, Patriots owner Robert Kraft stood with his hand over his heart.

As Eagles safety Malcolm Jenkins tweeted before the game, Philadelphia players locked their arms in unity. As a retired African-American serviceman, Petty Officer 1st Class Generald Wilson, belted out the anthem, Eagles CEO Jeff Lurie joined the team, locking arms with Jenkins on the sideline. Linebacker Mychal Kendricks opted not to join his team and stood off to the side during the anthem.
“Having spoken with our players, I can attest to the great respect they have for the national anthem and all it represents,” Lurie wrote. “We … firmly believe that in this difficult time of division and conflict, it is more important than ever for football to be a great unifier.”

Team owners Arthur Blank of the Falcons and Martha Firestone Ford of the Lions joined their teams on the sidelines, locking arms with their players. Starting running back Ameer Abdullah was among at least eight LIons players taking a knee during the anthem.
Detroit singer Rico Lavelle closed out his rendition of the anthem by taking a knee and holding his microphone aloft in his fist.

While both teams locked arms along the sidelines, Buccaneers star wide receiver Mike Evans and his counterpart DeSean Jackson knelt with their hands over their hearts. Coach Dirk Kover stood with his hand over his heart. The crowd applauded once “The Star-Spangled Banner” concluded.

As coach Mike Tomlin promised, the Steelers didn’t take the field for the national anthem. But offensive lineman Alejandro Villanueva, a former captain in the Army and ex-Ranger who did three tours in Afghanistan, stood in the tunnel, hand over a heart, as the anthem played.
Tomlin had said before the game his squad would remain in the locker room.

Six-time Pro Bowler and Super Bowl champ Suggs were atop the list of Ravens players taking a knee before the game in London. Alongside him was retired Ravens legend Lewis, who locked arms with wide receiver Mike Wallace and linebacker C.J. Mosley.
Other coaches and players locked arms during the anthem.
At least a dozen Jaguars took knees during the anthem, including defensive standouts Calais Campbell and Jalen Ramsey, as well as their No. 4 draft pick, running back Leonard Fournette.

What the coach and owners of the NFL don’t understand or aren’t even thinking about, is not only what they’re doing disrespectful to our military to the citizens of the United States but these athletes are also role models for our young folks. We definitely don’t want this kind of a role model for the younger generation.
Let’s share this list and expose these traitors!

Goodell will probably be looking for a new job after this season. The fanbase is leaving like it’s Syria. 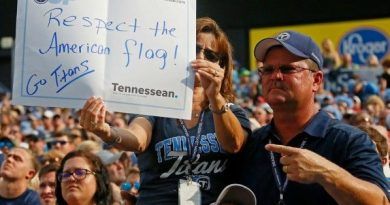 most people are unaware that when the military performs during NFL games, the taxpayers have to “pay” the NFL for the “privilege”. Yes, the NFL CHARGES the U S government for any of the pre-game and half-time shows that involve the U S military. For shame…

Do these guys even know what social in justice is. They are rich althelites who think they can do what they please. Turn the NFL off. Lets hit them where it hurts

To all the useless POS “protestors” getting paid millions to play a game and are members of the top 1%. Next time you take a knee , KISS MY ASS while you’re down there.

James — good one!!!! Next time you take a knee , KISS MY ASS while you’re down there.

Bottom line is that I do not know any other company that allows political protest on company time, do what you are compelled to do OFF the FIELD, not while at work. These privileged players are influential off the field as much as on, so take it there.

Anyone who supports these NFL misfits ought to have his/her head examined. I think the Federal government should remove ALL benefits to this bunch of millionaires that insult the country and fans that permit them to enjoy a far better life than they deserve.