Despite the critics from the opponents of the construction of the wall, who were saying that President Donald Trump’s proposed border wall would be fiscally irresponsible, a new study from Steven A. Camarota, the director of research at the Center for Immigration Studies has found that President Donald Trump’s proposed border wall only has to stop about nine to 12 percent of all illegal crossing in order to pay for itself over the next 10 years.
This is the reason why many American politicians started to support building the border wall and one fo them is Alabama Senator Luther Strange!

Senator Luther Strange and David Perdue introduced the Securing the Border and Protecting Our Communities Act.

The bill would prohibit certain Federal Transportation Grant Funds from being made available to sanctuary jurisdictions that refuse to cooperate with the Department of Justice in upholding immigration laws or who penalize local businesses for bidding to work on the border wall.

Funds not directed to these cities would be reallocated for use under the Secure Fence Act of 2006 toward the completion of the wall.

Sen. Strange said, “The American people spoke out loud and clear last year in support of one of President Trump’s most important promises – to finish building the wall on our Southern border.

This Legislation will restore the rule of law in Sanctuary Cities while helping fund the President’s promise. Penalizing businesses for joining in this critical national security effort is beyond the pale.

I introduced this bill to make it clear that cities do not get to play games with the safety of their people or ignore clear federal statutes. They can either follow the law or fund the wall. “

Strange went on Fox News’ Tucker Carlson to discuss his idea of where this much-needed wad of cash could come from right now, and it’s as ironic as using drug money to pay for it.

Those who want immigrants in this country don’t seem to have an issue with paying for them to be here, so they should be okay with footing the bill to keep them in their country.

Strange explained to Tucker that the funds should come directly from so-called Sanctuary Cities who don’t follow the law. In essence, this would be a fine for going against the President, not cooperating with local police, refusing to turn immigrants in, and worst of all, actually preventing people from fairly bidding on the border wall.

Sanctuary cities like San Francisco, California punish their citizens for participating in bidding on the construction of the wall by banning them from doing any other work in the city. This is not a democracy, it’s a dictatorship decided by liberals and since they aren’t stopping, Strange wants them to pay for the wall that’s already written into law.

The Senator’s simple solution is that cities who refuse to comply with the nation’s law aren’t going to get the money that they expect from the government because it’s going to go to building the wall. It makes perfect sense to not reward bad behavior with cash that could be used to ensure the rule of law which our nation is built on. Sanctuary Cities don’t make their own rules and can’t expect other people to pay for it when it goes against what the president has already set. Rather than defunding these defiant cities, divert the funding and let their laws be the country’s gain.

Build that wall Mr.President the USA is not a melting pot anymore. We cannot, and should not be supporting the world population. Take care of our people first.

Video: Diplomatic Humiliation – Vladimir Putin Gets Taste Of His Own Medicine As He’s Kept Waiting By President Erdogan 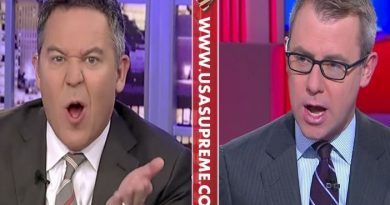 Social Security would be a great place for it. The government has been pillaging the SS money that WE paid in for years now. It’s only right that they put it back! You pay in for years and years and when it’s time to draw it they control how much of your money you get each month, and it is barely enough for groceries and rent. Also, medicare is paid in with every paycheck, but when you begin to use it they take money out of your SS each month. This is a very tender subject for me, and should be for all people who worked and paid into this .

If You read correctly..The money goes to pay for the wall.

Protecting our borders is one of the few actual duties of the federal gov’t. Do it !

The Federal Government should cut off all money to Sactuary cities , counties and States ! If they don’t want to play by the rules to hell with them !

Funny, I thought Trump said Mexico was going to pay for it. Oops I guess he told another lie!!! Gee what a shock!! Not

J merc, you still lost. I know everyone of your party always tell the truth!! NOT

Your just another silly idiot.

They want to be sanctuary cities. Fine. Keep all federal monies from them. And the ones they give sanctuary too. Make them make the city’s short fall. After all they should pay like we do!