Ukrainian President Volodymyr Zelensky on Wednesday implored the U.S. and its allies to “close the sky over Ukraine,” invoking Pearl Harbor and 9/11 and showing graphic images of the destruction and death wrought by Russia’s attack on Ukraine.

“Right now, the destiny of our country is being decided, the destiny of our people, whether Ukrainians will be free, whether they will be able to preserve their democracy,” Zelensky said in an impassioned virtual address to members of Congress, saying Russia has launched an assault on not only Ukrainian cities but also Ukrainian values and freedom.

“Russia has turned the Ukrainian sky into a source of death for thousands of people.”

Zelensky, who was met with a standing ovation by lawmakers in the room, used the speech to call for a humanitarian no-fly zone — an option the U.S. and NATO have consistently ruled out — and called for delivery of Soviet-era S-300 air defense systems to repel Russian airstrikes.

NOW – Standing ovation for Zelensky in the US Congress.

Internet sleuths caught a very controversial moment on Zelensky’s t-shirt and compared the symbols to the symbols that were worn by Hitler’s army!

SYMBOLS WILL BE THEIR DOWNFALL. pic.twitter.com/yj8vcsYaiZ

Pretty badass to address Congress in a t-shirt pic.twitter.com/WvaiySlCNm


“The Iron Cross was first a military decoration in the Kingdom of Prussia, and later in the German Empire and Nazi Germany. King Frederick William III of Prussia established it on 17 March 1813 during the Napoleonic Wars.”

Zelensky’s symbol however is the symbol for Ukrainian land forces. It’s not the iron cross though I admit it looks similar but the picture is also low quality:

The controversy surfaced after Zelensy admitted far-right group Azov in his army!

Azov is a far-right all-volunteer infantry military unit whose members – estimated at 900 – are ultra-nationalists and accused of harboring neo-Nazi and white supremacist ideology.

Damn Amazon, should you really be allowing these for sale…? azov battalion swag…. pic.twitter.com/oymKDdObVG


The unit was initially formed as a volunteer group in May 2014 out of the ultra-nationalist Patriot of Ukraine gang, and the neo-Nazi Social-National Assembly (SNA) group. Both groups engaged in xenophobic and neo-Nazi ideas and physically assaulted migrants, the Roma community, and people opposing their views. 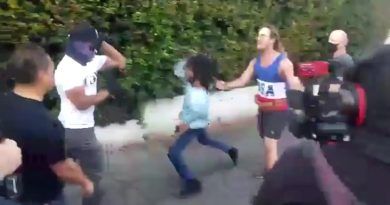 At last!! DHS Posts Up Bid Notice For The Great Mexico Border Wall !

It’s a friggin’ Maltese cross. Stop trying to make more of something than it is. This symbol was in existence for centuries prior to Hitler. The Fireman have a derivative of the cross for their symbol as well.

It seems to me I have seen pictures of that same cross and it’s history goes back to the Napoleonic Wars, also in WWI long before Hitler and the Nazi’s arrived on the scene. The Ukrainian’s Cross, though similar, has no connection to “Hitler” so enough of this left wing propaganda please. At this point if there are one or two Nazi sympathizers fighting on their side, miniscule for sure, it isn’t fair to lay that at the feet of Zelensky. He is try to keep his people alive, and is not out checking the backgrounds of every fighter. This whole thing sounds like contrived propaganda. Don’t forget before Russia went to war with Hitler, Stalin and Hitler were allies against the western world.

A bit of a stretch for the comparison of a Maltese cross compared to his on his shirt.
Typical knee jerk anti nazi fools hemming and hollering about “dem evil Natsi’s!!!!”
Idiots.