President Donald Trump has accused the Black Lives Matter movement of “dividing America” amid renewed tensions surrounding police brutality and race relations while suggesting he identified with African Americans who felt as though the system was stacked against them.

It seems our President is right again!

Demonstrators unfurled a banner that read “Stop Killing Us” at a Major League baseball game on Friday in St. Louis, where they were protesting the acquittal of a white former police officer who was accused of murdering a black man, local media reported.

A video posted on Facebook showed a group of demonstrators high above the playing field holding a banner with the St. Louis Cardinals’ mascot drawn on it as they shouted “No Justice. No Baseball” and “You can’t stop the revolution”.

The demonstrators were ushered out of the Busch Stadium, where the Cardinals lost to the Brewers 5-3. They then joined 200 other people in a march before the group was confronted by police in riot gear, who used a Taser on one and pepper spray on others, the St. Louis Post Dispatch reported.

At least two people were arrested, police said on Twitter.

Black lives do matter! God made ALL races.

They are all HIS
children, BUT the way the black people are trying to push themselves into jobs they are not qualified for, the idea that they
feel as if they should be allowed to sit at home & be paid by the government for every baby they have and then have one every year by another man so they can say it’s impossible for them to work! They get an apartment or house paid for by the government, they get food stamps, phones, TV, etc. and then
Yell: Black Lives Matter!
Do you agree with me!

GOOD!!! Gov. Abbott Will Sign Legislation That Could Put Sheriffs Of Sanctuary Cities In Jail

they should have been arrested. need to arrest all demonstrators.

I would have like to have seen the rest of the stadium patrons stand up and chant something along the lines of, “Yes, they do. What is your point?…”

They must think we don’t see them rioting in the streets, committing violence against others, and their processions, so they can loot. A true protest has no need to loot, this demonstrates their actions have no benevolent goal but to harm those who have done nothing to them. They are buying into the propaganda of the Left. We see them acting like thugs escalating situations with cops and then they wonder why they find themselves in the situations they are in. We see them leaching off welfare for housing, food, medical, everything required to live, all while popping out children year after year, to avoid working to support themselves. What they truly are is self-entitles leaches. All welfare needs stopped. Every child they have so drop them further into poverty. No work, no welfare.

Speaking of the NFL protests. Check this out. https://www.westernjournalism.com/butterfinger-zings-bears-game-followed-protest/

Also is this a patterned of “abused” blacks, a group to look up to for our political leadership?: 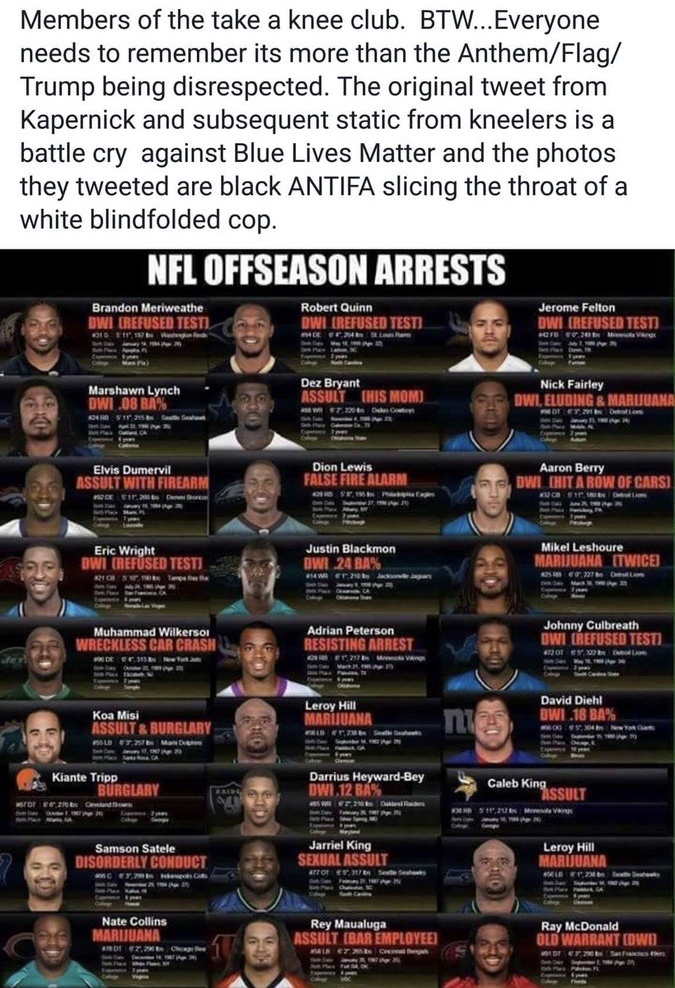