Our FLOTUS is genuine and sincere about who she is. What you see is what you get and that is what a quality person is all about. Our FLOTUS isn’t fake and she articulates her ideas and feelings directly without any kind of politically correct filter. In a word, she has that rare quality, especially in Washington, honesty.

Now, thanks to a new directive by first lady Melania Trump, visitors will now be able to view the famous White House movie theater.

On May 12, Trump announced that the “newest piece of the tour” was meant to give people more access to the building’s “rich history” and “wonderful traditions.”

The decision to open up more of the White House to ordinary citizens stood in stark contrast to former President Barack Obama and first lady Michelle, who wanted to keep up their privacy but regularly hosted celebrities and star-studded events while suspending citizen tours of the mansion for eight months in 2013.

In her announcement, Melania Trump said: “The White House belongs to the people of this country. I believe everyone who takes the time to visit and tour the White House should have as much access to its rich history and wonderful traditions as possible. It is my hope that our visitors truly enjoy the newest piece of the tour.”

In the past, Presidents would use the @WhiteHouse Family Movie Theater to rehearse for the annual #SOTU address pic.twitter.com/xz8WsqQn8j

In the past, The East Wing theater has been used to host special guests, such as military personnel and their families, and as a rehearsal space for residents preparing for major speeches.

.@FLOTUS is proud to announce the movie theater is now open on the self-guided tours. Find out more: https://t.co/fDg05yKtp4 pic.twitter.com/z5bq2FYMRf

Bless our First Lady! What a refreshing change it is from the selfish, whining embarrassment we endured the previous eight years!

America Loves You First Lady Melania. Share this if you support our FLOTUS! 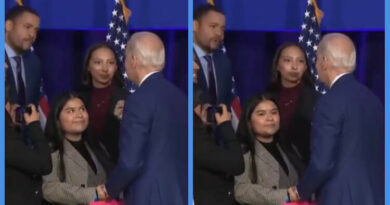 Video: Biden Puts Up Fists to Young Girl’s Face, Grabs Her Hand and Doesn’t Let Go for Almost an Entire Minute – The Look On Her Face Says It All

Describing Michelle Obama as a “selfish, whining embarrassment” is accurate but not sufficient. That woman was/remains classless and clueless, and her trashy, twerking daughters are no better. Her husband should be in jail where he belongs. I hope the White House was fumigated before the Trumps moved into their well-earned and well-deserved home.

I was going to say somethings … but ….Ivy Katz up there ahead of me, took every word, and more that I was preparing to pontificate with and over. 🙂

Now, I must concede my time and word allotments due to just being plain out done by the astute Ivy.

I now, am almost speechless.

I am now honorably presenting a Tip Of My Cap to Ivy Katz for so eloquently, so precisely, so dead on target comments concerning the Eight Year Embarrassment Experiment We the Deployable had to endure.

The new breath of fresh air now flowing from the People’s White House is a true gift, no Real American can ever again take for granted.

Again thanks for those wonderful Words Ivy Katz.

What a nasty nasty hefa Michelle Obama is. A classless wonder. How could we be so blind for eight years.

Thank you Ivy and Michael for expressing my feelings so eloquently. There’s nothing more to say. 🇺🇸🇺🇸

The author of this “article” claims to be a journalist but also says she has no intention of being impartial — pretty shady!

And ….. if was budget cuts, forced by the Tea Party, that led to White House tours being canceled during 2013 … but facts don’t matter to shady characters like this 🙁

You just have to wonder how the fake news media will spin this to make Mrs Trump look bad.