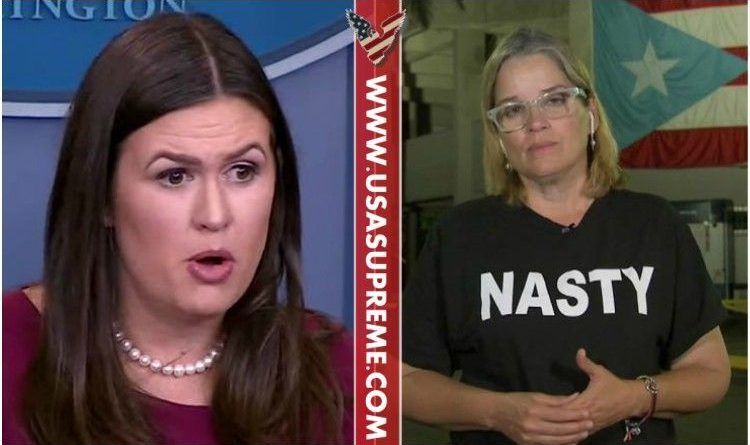 Sarah Sanders is a strong woman who is not afraid to speak the truth. She is not that kind of a girl who will just stand there and listen to the liberal media constant attacks! No, she did something that made us all proud of her!

San Juan Mayor Carmen Yulín Cruz wore a T-shirt adorned with the word “nasty” during a TV interview on Wednesday after President Trump repeatedly used the term to describe her.

In Thursday’s White House press briefing, Sarah Sanders asked to comment on the Mayor of San Juan’s ‘Nasty’ Shirt and it’s scorching. Watch the video below!

In Thursday’s White House press briefing, the “nasty” shirt was mentioned and Trump’s visit to the island was called “very controversial.” White House Press Secretary Sarah Sanders cut the questioner off cold at that classification and leveled a savage retort, focusing specifically on Cruz and her behavior as mayor.

It’s so fire, it’s worth posting her remarks in full here:

Reporter: “The president went there, it was very controversial…”

Sanders: “Actually it wasn’t controversial. It was widely praised, even by a Democrat governor. I think that it is sad that the mayor of San Juan chose to make that a political statement instead of a time of focusing on the relief efforts. The president invited her to be part of that conversation. He specifically asked in the meeting where many were present, including a couple dozen other mayors who were very happy with the recovery efforts.

The governor, the Congresswoman … He opened the floor up for discussion and she actually made zero comments. To me, that would have been the time and the place that she should have weighed in and asked for what she needed and laid out what she was asking for, for San Juan.

She didn’t. Instead, she chose to wait until the president left and then criticize him on TV, which I think is the wrong thing for her to do for her constituents. I hope next time she’s given the opportunity to help her constituents, she’ll take it.

Sometimes, I do not understand why we have these sessions, where the news asks the most insane questions and their sole purpose is looking for ways to make derogatory comments about the President.

Luckily, Sarah is one smart woman and doesn’t back away from a question. The mainstream media does not have a chance against her. She’s just as calm and laid back. Great choice to put her in this position. Enjoy watching her.

What do you think? Scroll down to leave a comment!

Great job Sarah…she is a very talent woman and a right person for the job.👍👍👍🍾🍾🍾👍👍👍❤keep up the great job. Good luck to Sarah.

I think it was a great choice. she is no nonsense.