The gloves came off Tuesday night when the two Republicans vying to succeed Gov. Chris Christie squared off on the debate stage for the first time in the GOP primary.

They tussled over Christie — chiefly on who is least like the unpopular fellow Republican.

People used to believe that Christie would become president. The governor enjoyed extraordinary support before his administration was crippled by numerous scandals. His second-in-command, Lieutenant Governor Kim Guadagno, hopes to replace him when he leaves office next January but it’s unlikely that her campaign can succeed if she doesn’t distance herself from Christie.

“Democrats would be over the moon if the Republican nominee showed up in a photo op with Gov. Christie, because that would be game over,” Monmouth University pollster Patrick Murray told Politico.

“Because if they do, and if they’re successful in doing that, they will win by a landslide.”

Christie’s approval ratings took a hard beating last year. He floundered as a presidential candidate before being fired from President Trump’s transition team and denied a cabinet position. Christie himself seems to know that he’s become political poison.

“I’ve done plenty of campaigns,” he said at the end of last month. “So my heart will not be broken if I’m not asked to campaign for someone in the upcoming gubernatorial race.”

There’s little chance of Guadagno appealing to him for campaign help. Christie’s influence is limited. His political career will probably be over once he leaves office.

“They’ve earned the right to compete against each other, have their voices be the loudest in the political debate over the next number of months, and then let the people decide who they want to be the 56th governor,” Christie said. “And I don’t think the 55th governor should be getting in the middle of that and trying to say, ‘Hey, whoa, look over here — what about me?’ I’ve had plenty of time in the spotlight. I’m satiated.”

People all across New Jersey are demanding change, and I am here to change things,” Philip Murphy, the former Goldman Sachs executive running against Guadagno said Tuesday night. “Four more years of Chris Christie-style politics won’t make New Jersey the state where we draw the line against Donald Trump. But we will.”

Murphy is currently leading the polls. New Jersey has historically been a blue state, and Christie failed to revitalize the state’s Republicans. In fact, he essentially did the opposite. According to reports “Christie’s approval rating is just 18 percent among New Jersey residents; it’s been below 30 percent since the middle of 2016. His current rating is among the lowest for any New Jersey governor in the past 40 years.”

It will be a relief to the party when Christie leaves office. The once popular politician is now viewed as a viper. Disgust over Christie’s actions may even bleed into the presidency. If the state rejects future Republican politicians the left will call it the “Trump Effect.” 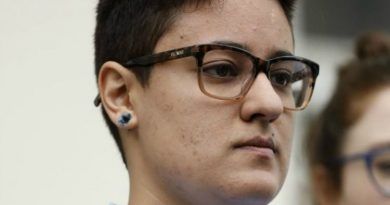 republicans are going to lose this race….fools