The View is an only hateful show that is sinking without a trace! That show went in the toilet when Barbara Walters left! It is now a trashy show that needs to be canceled.

Joy Behar is a loud mouth with no talent. She has attacked Donald Trump since the beginning of his campaign but this time host Joy Behar took things a step further!

“Like you pointed out in your show last night, the electoral college is something the Democrats have not been able to get,” Behar explained to the 63-year-old filmmaker during his appearance Thursday on “The View,” The Daily Caller reported.

“It’s the second time in 16 years, the first with [Al] Gore, that we win and then we lose,” Moore exclaimed. “How does this happen? You know?”

“They steal it, that’s why” Behar interjected.

“That’s the good news of the country we live in,” he added. “But we have this archaic thing that’s got to go, the electoral college. “

“They are never going to get it go because it helps them,” Behar explained.

Moore then said that using the electoral college was how Trump “outsmart[ed]” the Democrats.

The Liberals are fine with the Electoral College until it goes against their wishes.

Much like anyone who speaks opposition to their mindless chatter, if it does not support them, it must be eliminated.

Lenin, Stalin, Hitler, and Mussolini all practiced this method. For the uninformed, the term for this behavior is “fascism”.

Ivanka Trump Was The Subject Of A Biting SNL Sketch! 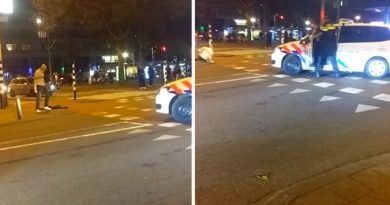 Suspect With Knife Gets Shot by Dutch Police

Trump During NRA Speech: I Will Never, Ever Let You Down.”

As A Michigan resident.I am ashamed to have this Man? M. Moore in my state. He is a liar.

Thank you for saying what you did about M, Moore. Why do people think they can
say such things? Just let it go!!

Joy looks like an illuminati clone. Michael is just a slob with no hope of becoming a normal American citizen. I wouldn’t waste my time watching or listening to these two mentally impaired idiots. They can’t wakeup because they have been illuminated. They either stay that way or die. Just as MOST hollywooder’s do.
PEOPLE NEED TO WAKEUP, SHUT OFF THEIR BRAINWASHING TV DEVICES & GET A GRIP TO RETAKE OUR COUNTRY FROM THE EVIL WITHIN IT…..

Joy & Michael make such a lovely couple! They sound nearly like they write each other’s speeches and tirades! You guys go for it. Trump isn’t going anywhere anytime soon!

They are both slobs and don’t know anything about American citizens. We voted for Trump because Hillary is a liar and a thief and a murderer! Simply put.

both of these anti Americans are nothing but spotlight hounds and should be banished from the U.S.A.

These two clowns,Joy and Michael.arejustpersons who have to have a cause to stay
On t,v. No one takes their trash talk about our pres. With any seriousness. It’s well
Known if Trump were a democrat they would be kissing up. Face time is their number one goal.

Drama queens, and crybabies.! They think they should be heard, but Tim Allen shouldn’t be.???. I bet they believe that Berkeley was complete in the right when they through their temper tantrum.. time to grow up and know what’s real and life is not show business.

they just cannot get over that Trump won” why this view is still on the the air I don’t know but they all have big mouths and need to be fired but nobodys got the balls to do it”’ makes me sick ‘ I want to vomit.

They are both so disgusting, how they can think that hillary is so great, with all the filth, lying, murders, she is a total skank! And these has-beens on the view should be cancelled. Where else can you have a show where all you do is slander, and lie, and be so stupid, and get away with it? I pray that trump can get Soros, and hillary, and stop the paying of the protesters, and call a halt to their whole disgusting plan to ruin our country, economy, and tear it to shreds. Cancel this dumb show, put these political witches out of business, and into the unemployment line.

The height of stupidity. They know nothing! No, investigations have shown that Trump actually won the popular vote too, by millions. Cancel this senseless show that lies and distorts the truth. Look on youtube for the investigation and tallies made by the states.