The spell is meant to curtail Trump’s power without causing harm. Whether or not such a spell is taught at Hogwarts is up for debate.

Never one to betray her brand, moon queen Lana Del Rey has expectedly joined the masses of witches worldwide in their quest to vanquish Donald Trump.

In the interview with Britain’s New Musical Express (a publicity refuge for the talentless and meretriciously controversial if there ever was one), Del Rey explained that she decided to put a hex against the president because, and I quote, “I do a lot of s***.

And because Lana’s a good witch (though maybe also a little bit satanic), she’s not spilling centuries-old witch secrets.

Lana asks that you please just Google the ingredients to the spell rather than sneak a peek at her Book of Shadows.

Del Rey giving the interview to promote her new album “Lust For Life,” an album that preemptively addresses the question of whether or not Del Rey has developed any semblance of originality by ripping off the title of Iggy Pop’s most famous work.

During the interview, Del Rey was asked whether or not a mysterious tweet from February was part of a hex against President Trump.

On that last part: yes, I know. I heard your first album, which was more than enough for me.

She was then asked whether she did other spells at home.

“I’m in line with Yoko and John and the belief that there’s a power to the vibration of a thought,” Del Rey said. “Your thoughts are very powerful things and they become words, and words become actions, and actions lead to physical changes.”

WHAT IS NEXT FROM OUR CELEBRITIES THIS IS TOO MUCH AND THIS HAS TO STOP! DO YOU AGREE? 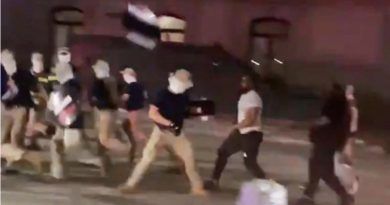 Videos: “Patriot Front” Members In Philadelphia End Up Chased And Heckled By BLM Activists – They Were All Detained By The Police

America First! Trump Shared His Brilliant Plan That Will Make Our Country Better!

this woman is not witch. She is a practitioner of the dark arts. Anyone that has EVER TRULY BEEN INITIATED OR TAUGHT BY REAL WITCHES KNOW THAT THE FIRST RULE OF THE CRAFT IS “AND IT HARM NON DO WHAT THOU WILL.” SHE’S A LIER LOOKING FOR PUBLICITY. WHERE DID YOU COME UP WITH THAT CRAP ABOUT WITCHES AROUND THE WORLD JOINING TO WORK AGAINST PRESIDENT TRUMP? THAT IS BULL****. HE HAS SAID NOTING AGAINST ANY RELIGION. THAT IS JUST YOU TRYING TO GET PEOPLE RILED UP. ARE YOU IN HILARYS BACK POCKET?

Hmmm. My Bible says of Christians ”NO WEAPON FORMED AGAINST YOU SHALL PROSPER.” I LIKED IT WHEN PRESIDENT TRUMP HAD THE PASTORS WHO WERE VISITING THE WHITE HOUSE LAY HANDS ON HIM AND PRAY OVER HIM…LIKE THE SCRIPTURE REGARDING BAAL AND GOD, GOD WILL WIN AGAIN. SATAN ONLY HAS POWER IF GOD GRANTS IT.

This woman or satan has no power over Pres Trump. Scripture says ” NO WEAPON FORMED AGAINST YOU SHALL PROSPER”…I loved it when Pres Trump had the pastors visiting the WH pray over him.. God is worthy and greatly to be praised…