An attempted armed robbery of a jewelry store near Redwood City on Monday led to the store owner using his own gun to shoot at the suspects, though no one was hurt, according to his wife and co-owner.

Surveillance video shows the moment three masked gunmen stormed into Plaza Jewelers Monday evening, ordered everyone to the ground, and demanded their money and jewelry. But they’re seen frantically running out of the store seconds later — after the store owner shot at them.

The store owner once again revealed the power of the second amendment as he saves his property from being looted but he also saved the lives of his customers!

“If he didn’t have a gun, they would have taken everything,” Rosalva Farias, co-owner of Plaza Jewelers, said about her husband shooting at the would-be robbers.

Farias and her husband own the jewelry shop on Middlefield Road in unincorporated Redwood City. She said that when he saw the armed intruders, he shot his gun, and he nearly hit one of the masked suspects. None of them reportedly shot back.

Fareas told KTVU that this was not the first time someone tried to rob the store at gunpoint. She said a similar incident unfolded in 2013. During that holdup, her husband also responded by using his gun to thwart the robbers. “My husband got the gun,” Fareas said, “They heard a noise and ran away.”

He owns the gun legally and said that he is ready to exercise his second amendment rights again if needed.
Police haven’t arrested the suspects as of press time.

Video: The Head Of The Military Medical Service Says The Order Was Given To Castrate Wounded Russian Soldiers, Because Russians Are “Cockroaches, Not People” – They Deleted The Broadcast A Few Moments Later

Man Pulls Gun On Police Officers, Goes Down In A Hail Of Bullets (Video) 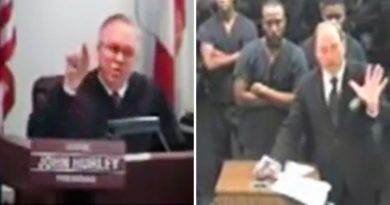 NO PC JUDGE SHUTS UP #BlackLivesMatter Lawyer With 2 WORDS!! (VIDEO)

I don’t know about “fortunately”.

Vigilante Justice – the time is now.

Sadly yes. The police are impotent and the politicians are getting skim money from this chaos.

Awesome response but too bad the scum didn’t have their guts falling out on the sidewalk. Maybe next time.

He showed them potent power of a firearm, despite the impotent Second Amendment.

America was sold down the river when the 18th-century founding fathers replaced Biblical responsibilities (based upon the moral law of God) for Enlightenment rights, and nothing demonstrates it better than the Second Amendment.

Think about it: The Amendment WITH the wording “shall not be infringed” is the MOST infringed, licensed, and limited Amendment of the entire twenty seven. Furthermore, a future generation of our posterity is likely to see the Second Amendment whittled away entirely or repealed altogether. This is inherent nature and danger of optional Enlightenment rights versus non-optional Biblical responsibilities, such as the following:

“Let the high praises of God be in their mouth, and a two-edged sword [or today’s equivalent] in their hand … this honor have all his saints. Praise ye Yah.” (Psalm 149:6-9)

“But if any provide not for his own, and especially for those of his own house [beginning with spiritual and physical protection], he hath denied the faith, and is worse than an infidel.” (1 Timothy 5:8)

Which is more potent: 1) An optional right, or 2) A non-optional responsibility?

Which is more likely to be infringed, licensed, and ultimately abolished altogether?

Which did the pre-Second Amendment Americans look to for their authority to bear arms, with little or nor infringement?

For more, listen to “The Second Amendment: A Knife in a Gunfight,” delivered at the Springfield, Missouri Firearms and Freedom Symposium, at Bible versus Constitution dot org. Go to our Video page and scroll down to title.

See also online Chapter 12 “Amendment 2: Constitutional vs. Biblical Self-Defense” of “Bible Law vs. the United States Constitution: The Christian Perspective.” Go to our Online Books page, click on the top entry, and scroll down to Chapter 12.

They parked outside? License numbers, anyone? Stupid, and they left quicker than they entered.

Defund the government and lock and load.

Start with a Tea Party with Indians on the IRS for starters.

Needs more practice at the firing range. Shoot at center of mass until threat to your life is ended–hopefully in the morgue . . .

The cops would have just let the thugs go.

“Fortunately, no one in the store was hurt???”
What would have been more “fortunate” is if the robbers had all been shot.

The store owner needs to visit a shooting range and improve his “gun control”. Where did the bullet go that missed. The next time they may start shooting first, and that shotgun the first one was carrying could make quite a mess.

Guns are a girl’s best friend

Hey, it was Robbin’ Hood and his Merry Men. Rob from the Rich, Well to do, okay, steal from what appears to be an easier target and give to themselves.

Sounds like shooting lessons are in order. Zero out of four is piss poor shooting.