Women today want to be equal or more but only when it suits them. I know of men who were beaten by their wives and could not hit back, because the wife would call the Police. When a man calls the Police, nothing happens. I don’t believe in a man hitting a woman, but if a woman is attacking the man the fact that she is a woman became irrelevant. People have a right to defend themselves and/or retaliate on their aggressors regardless of gender.

One liberal woman posted on Facebook that she was going to a harm 100 people at a Berkeley protest. When video surfaced of her getting punched, the internet went into hysterics. She wears what looks like a sap glove on her right hand (a weighted-knuckle glove). They are illegal in California if the knuckles are metal.

Watch the video below:

Normally I do not condone hitting a woman for any reason, no matter what but she seemed to be daring him to react to her attack and he does have the right to defend himself.  But remember… Liberals are gender less. She might not be she today. She might have “identifed” as a He. Or a transgender He/She. Libs recognize 32 types of genders… You know they were filming this just to show her getting hit to make the others look bad. Typical liberal tactics. In this particular case, she got what she was asking for.

Can you hit a woman if she punches you in the throat first?? Do you think this was OK, or over the line?? 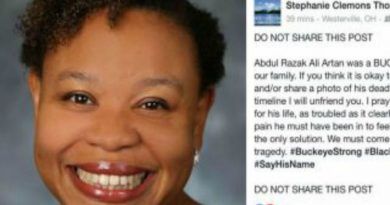 Nail that slut, she started the fight, suffer the consequences, give the man a cigar.

this era has double standards to many wicked women,what if she crush his wind pipe and died cause of her era rights which don’t mean you can go around hitting people but if she gets hit back then she’s a helpless woman,thats whats wrong with the laws today!

hahaha that was freakin great punch the hell outta that bitch lmfaorotf !!!!!!

She got what she asked for

I hope that hurt like hell—-smart ass liberal fool

i would beat the shit out of that bitch if she did that to me. She deserves what she got and anyone that gives that money on GOFUNDME is a DUMBASS

Same if your wife punched me? OK for me to knock her into the next zip code?

She deserved it…Knock a little sense into her. You bring it on purpose…you pay the price.

she wants to fight like a man, beat the shit outta her.

Ab-sa-freakin-lutely she deserved it. If you can dole it out you gotta be able to take it too.

Wish he would have punched her many more times !

If you’re in a riot you have to fight, she fought and lost

She had a sap glove on that us filled in the fingers with lead. Cops use these. She wanted to crush his larynx Got what she deserved

She was the asshole that was putting m80’s in glass bottles and throwing them at the people.

I don’t think he hit her hard enough I didn’t see any teeth flying.

That IGNORANT B*TCH needs to be ARRESTED. She attacked him first.

Lucky for her that she is female and only got hit one time. Had she been a man a world of hurt would have come down on her head. I have seen several videos of this antifa arse whooping and her comrades got mauled, beta males,,,,,, Funny. To the guy that threw the punch, respect it is obvious by the three camera views I have seen he reacted to being attacked and in faced checked up his swing when he realized his nemesis was a minor threat. I dearly would love to know what he said to her as she went down, I know he said something to her.
While this is just terrible to witness these idiotacrats needed a lesson on civil political protest as they are no more than rioters.

now a days we can’t be sure it is a girl. but if you fight, expect return fire.

Im a woman and was always told that a man should never hit a woman. Thats true. But anyone has the right to defend themselves. Man vs. Woman or whoever. She was looking to get her shit rocked. Practically begging for it. She should be arrested. Period. And he doesnt necessarily need a pat on the back but he shouldnt get shit on by any means for what he did. She got what was coming to her.

Seventy yr old+ here and Vanessa just saved me from having to type so much. If true about the type of glove she wore, he should have hit her harder.

The old saying is You fuck with the Bull, You will get the horns in your ass. So it happened. Good lesson for the future…

Obviously, she went there for action…..she got what she deserved….if she had not gone to the riot, she would not have an issue now….she deserved what she started…

If you wanna dance you gotta pay the fiddler

Equal rights means a lot of things, including getting your ass kicked. It is no longer gender specific. If you choose to hand it out, accept the consequences.

I don’t hit women, but in a case like this, he should have hit her harder. Maybe next time she’ll stay home.

Gender Equality…. should have hit her harder so she would have stayed down, cause thats what would have happened if a man punched him like that.

A woman? no never. But then again that wasn’t a woman he hit it was a female liberal idiot that thinks they can do whatever they want. Well, I guess in this case she was wrong

Got what she deserves.

..? Was she protesting Neo Nazi people?

He should have pulled that ugle hair as he punched her. Bravo to him for not taking any of her crap. Time for this kind of crap to be knocked off.

wpDiscuz
36
0
Would love your thoughts, please comment.x
()
x
| Reply
Send this to a friend