The U.S. Navy has launched an investigation into the case of a sailor who didn’t salute as the National Anthem played during a recent morning flag-raising at Pearl Harbor, an official said Tuesday.

U.S. Pacific Fleet spokesman Senior Chief Petty Officer Joel Cesar said it’s up to the sailor’s commander whether she faces any punishment for failing to salute the flag on Sept. 19.

“I have been proudly serving in the US Navy Reserve Force since November 2008. I have pledged to support and defend the Constitution of the United States and to spread freedom and democracy around the world. I will never waver from that pledge,” she wrote in the post, which included a photograph of herself in her Navy blue digital camouflage work uniform.

Her choice not to stand for the anthem was a conscious decision, made for ideological reasons, she said.

“I feel like a hypocrite singing about the ‘land of the free’ when I know that only applies to some Americans,” she wrote. “I will gladly stand again, when ALL AMERICANS are afforded the same freedom.”

According to activist and New York Daily News reporter Shaun King, who publicized Ervin’s case on Twitter along with a Change.org petition supporting her, Ervin said she lost her security clearance and was threatened with jail by the Navy in response to her actions.

Doughty would not confirm that Ervin lost her clearance or that any other specific actions were taken in connection with her.

Like Kaepernick, Ervin’s protest refers to the Black Lives Matter movement and reported incidents of black Americans losing their lives at the hands of law enforcement officers in episodes allegedly driven by racial bias. Ervin did not specify what actions she wanted taken to ensure Americans equal freedom.

“The Navy has decided to punish me for defending the Constitution and has taken away my equipment I need to do my Naval job,” she wrote. “It was my pleasure serving my country, I love it dearly, that is why I must do this for you. I will keep you all posted on what happens next!”

Her September protest made headlines across the country, apparently even drawing attention from Colin Kaepernick, the NFL quarterback whose anthem protest drew both followers and harsh critics.

Ervin accuses the Navy of threatening her career, removing her from her regular post as an intelligence specialist, revoking her security clearance and assigning her to wash and wax cars as a punishment.

She was fired from her job at Leidos, a government contractor after someone from the Navy called her employer to say her clearance was suspended, she said. Ervin told IBT the company’s human resources department told her they didn’t have work for her without a security clearance.

Navy rules state that troops must stand and face the flag when the National Anthem is played. Troops in uniform must salute, while troops not in uniform must stand at attention and place their right hand over their heart. Failure to obey these rules could be charged as a violation of Article 92 of the Uniform Code of Military Justice — failure to obey a lawful general order or regulation

Hollywood In Shock This 1942 Video Of Gene Autry Surfaced, It Confirms Everything Trump Has Said Is Truth

Media Scrambling After Never Trumper Reveals The One Thing That Made Him Jump On The Trump Train! 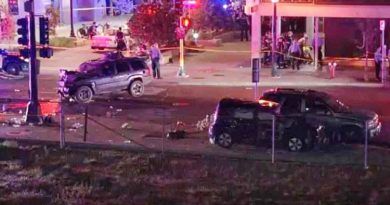 Videos: Woman Killed After Car Drove Into BLM Rioters Last Night In Minneapolis – BLM Beat The Snot Out Of The Driver

When you volunteered, raised your hand and took the oath, you said you will abide by all guidelines and regs! Sorry, you learned this before you got out of basic training and the UCMJ, it is a 24/7 job, besides thinking for yourself and views, what about all the other members that can’t count on you? Another thing you didn’t get, there is no color in the military!

I agree toss her out right now –she nothing special just like all other enlisted -she either does as all other s or she needs to find another career — she is disrespecting our Flag – country and fellow service members!

A petition in support of another idiot who has a bitch to pitch bc she has a problem with her specific job duties, which are in black and white, clear and concise, no question about it? People are truly unbelievable.
She has no clue of the pickle she’s got herself in now. And her actions will be following, haunting and taunting her for the rest of her ever.
Now I want to know where’s the petition to have her dishonorably discharged?
That’s the one I’ll be signing.
If you want the paycheck THEN DO THE JOB

Dishonorable discharge mandatory here. She does not belong there. Maybe she belongs in the ghetto. Never really left it.

You ’bout have to kill somebody to get a dishonorable, but a bad conduct or an undesirable sure would work.

It’s the 4th stanza not the 3rd. Plus you’re citing the stanza incorrectly. You don’t deserve to wear the uniform, look at the flag, and you’re a disgrace to your parents and you just brought discredit to yourself and the United States Navy.

Jail time, she made it a point to post it publicly, that she disobeyed a direct order

I served 22 years before getting out of the military as a retiree, several times I disagreed with things that the nation did, and that the command did, and when I voiced these disagreements I was always told the same thing. “If you don’t like it, GET OUT!”

You were not drafted like our Vietnam vets you went and signed up with a recruiter on your own free will and have been paid a salary with benefits. Now is the time to take responsibility for your choice and suffer the consequences. Dishonorable discharged from the military no compensation loss of medical benefits, future retirement benefits, schooling or VAHome loan program and at the end of your life no burial or tribute for your service with taps and presentation of a flag to your family members with the words “on behalf of the President of the United States of America and a greatful nation.

Agree totally. She has got to go. Give her 10 years in prison and kick her our.

Court martial and dishonorable discharge.she will spend the rest of her life suffering her idiotic decisions

Seriously……there’s still slavery in this country? Why doesn’t she follow Kapernick to Africa where I’m sure she’ll be so much happier. She should definitely be discharged as she has no pride in serving.

Evidently went in military to get something for free. She sure as hell doesn’t belong there. Send her ass on the front lines so she will see what it all means. Court martial and dishonorable discharge!!

Too many of our African Americans are only damaging there own place in our society. They among themselves should get together and get an honorable, honest leader or eventually go backward. Shape up you fools.

Protest was no longer when she gave the blackpower sign, It now became a radical support of a radical group. Dishonorable discharge nothing less.

All military and veterans must stand tall for America ,!

Disappointing that she fails to understand the oath she took when she first put on the uniform. She has brought dishonor to herself and to the uniform. She should be discharged and lose all benefits.

There’s a big difference between NFL rules and the UCMJ. She will be court martialed and probably get a bad conduct discharge. Certainly a reduction in rank, loss of veteran’s benefits.

Court martial her ass, give her a general discharge other than honorable. Send her packing back to the street.

So lease tell me anywhere in the United States, that anyone, anyone is not free. Unless they are in prison, everyone is free in this country. I see no slavery here, the only people that don’t have jobs are ones that refuse to look for work, don’t want to work, are too old for work , disabled or in sone cases, a criminal background so bad no one wants them. Sand way with schools. And anyone, except those with criminal backgrounds, disabled or refuse to follow orders, can work in the military. So pkeaseX tell everyone just where you aren’t free in this country. I also noticed your too afraid to do the Black Panther salute at the same time. A half assed, halfway attempt of raising a closed fist. And now your crying because the Navy took aaay your security clearance, something they do to all that have a. Oearabce, when they are being investigated for not following rules and regs. But see, you knew all this was going to Napier. Your looking around to see ic anyone was watching gave that away. Your not even proud enough to do it if anyone can see. You don’t deserve to be in this countries military. Our military is for those who are brave and love their country. Good luck finding another job other than fast food. Because that little stunt just cost you a dishonorable discharge. At the least.

If you notice all these things started when obummer was pres.!! If anyone does not to stand and pledge allegiance to our flag then get the hell out of America!! This is the land of the free, not the land of hypocrites!!!

I entered all required fields!

I spent 6 years in the Marine Corp and I can say that when you have someone like her in your company that is disrespectful they can no longer be trusted . If she doesn’t care about our nation how can she care about the others in her ranks .

wpDiscuz
26
0
Would love your thoughts, please comment.x
()
x
| Reply
Send this to a friend