When it comes to reporting about Trump and his family, media only covers the bad news. However, we are here to inform you with the truth!

And the truth is that we have a classy first daughter!

Ivanka raised eyebrows when they met key figures in Saudi Arabia, without wearing headscarves, as Saudi women are required to do by law. But my opinion is that they shouldn’t obey a religion that opposes everything that we stand for as Americans.

Ivanka Trump dressed modestly in Vatican today, but she did it in her own way.  She stuck to her signature takes on power-dressing throughout, wearing white sheath dresses and nipped skirt suits by American labels like Michael Kors and Oscar de la Renta.

Traditionally, under Pope Benedict XVI and all those before him, the rule was that women should wear black to meet his Holiness, covering up with full sleeves and a mantilla, the lace veil traditionally worn in the Roman Catholic Church.

And our first family respected the rules of the Roman Catholic Church, I am sure the MSM will find a way to twist this into some huge witch hunt!

The pope handed out rosaries to members of the delegation before the group posed for pictures, and then he bade the president and his family farewell.

Donald Trump and Pope Francis meet at the Vatican!

Are you proud of our first family?

This is what we have waited for years a first family with Christian values!
Are you proud of Ivanka Trump and our first family? 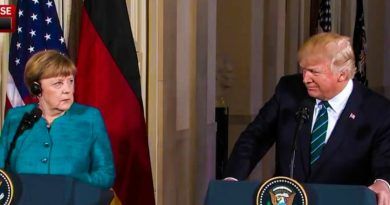 Trump Says Relationship With Germany Is ‘Very Bad’ And ‘Will Change

Ivanka ALWAYS dresses MODESTLY……quite unlike our former FLOTUS who is parading around Italy
dressed like a hippie teenager!

No doubt about it. Both these ladies certainly are very classy and make America Proud !

…..and notice, at the Vatican, both ladies have their heads covered. Reverence, where reverence is due!

No matter where the Trump family goes they are ALWAYS dressed in the appropriate attire. Looks, clothing, manners, they have it all. It is sad that our TV news stations don’t show all this good which the family continues to show the world. Nice to see that Our President and family are RESPECTED very well outside the USA. God Bless
and keep them safe.

This is the way we dressed for church years ago . I wore lace on my head like Melania did. She is one classy smart and kind First Lady!! I’m so proud of her!! GOD BLESS OUR FIRST LADY!! She is doing great!!😇

Pope Francis Must Have Been Very Proud To Meet and Greet The POTUS and His Family…Melania and Ivanka And Jared and Exchanged Gifts For Each Other!…President Trump Gave a 4 Volume Set Of Book On Rev. King and Pope Francis Gave The POTUS A Framed Medal Of Peace!…The Woman Were Dressed With Respect In The Presence of Pope Francis @ The Vatican In His Private Room!
Very Proud Of The Trump Family!!