A man wielding a knife was fatally shot by police inside a residential building in San Francisco Friday, authorities said.

Officers responded to the building in the South of Market neighborhood after receiving a call about a man armed with a knife, San Francisco Police Officer Robert Rueca said in a statement.

The officers made contact with the man and an officer-involved shooting occurred, Rueca said without offering any other information on what led to the fatal shooting.

Chief Bill Scott and other department officials held a virtual town hall Wednesday in the death of 41-year-old Ajmal Amani.

“Without suggesting a premature judgment on the appropriateness of the force used in this particular incident, I can express on behalf of all of us in our department our condolences to Mr. Amani’s family, friends and loved ones for the loss they’ve suffered,” Scott said at the town hall.

According to Commander Paul Yep, officers were called to a residential hotel on the 900 block of Folsom Street shortly after 8 a.m. Friday on reports of a man holding a knife. The caller said she could not stay on the phone because the man “has a knife to my face.”

When two officers arrived, they found the caller and another victim who said he was also threatened with a knife. Both victims were determined to be employees of the hotel.

Yep said officers then walked towards Amani’s room and found a man consistent with Amani’s appearance at the end of the hallway, yelling and pointing at the officers, before moving back out of sight.

Video shows the officers then walked back towards the victims and then established a position in the hallway, and said they wanted to talk to Amani.

Yep said at this point, one officer had drawn his department-issued handgun, while the second officer was armed with a so-called “bean bag weapon.” The first officer then called for additional resources, which included an ambulance to stage nearby, along with a tactical shield, which the commander said was consistent with SFPD training.

About a minute later, Yep said Amani then stepped back into the hallway, screaming and brandishing a knife. He then charged towards the officers with the knife.

Videos show the officers asking Amani to talk to them, but they continued to maintain their distance. Minutes later, additional officers with a tactical shield approached Amani and secured the knife. Officers and medical personnel then rendered aid.

What it’s more important is the fact that not one mainstream media reported that the man was screaming “Allahu Akbar” while running towards the officers and that he was a former Afghan interpreter!

Yep said Amani was taken to Zuckerberg San Francisco General Hospital, where he was pronounced deceased.

According to the San Francisco Chronicle, Amani was a former Afghan interpreter for the U.S. Special Forces. In 2019, Amani was charged with assault with a deadly weapon for allegedly slashing a city park ranger with a box cutter.

The newspaper reported that Amani was ordered to undergo mental health diversion which he completed this year and was living in a city-rented room at the hotel.

The shooting remains under investigation.

Video: Trudeau Mocks Trump While He’s Out Of The Room – Trump Responds By Humiliating The Canadian Prime Minister 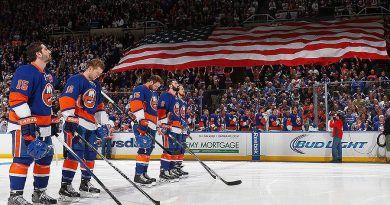 USA Hockey Coach Promises To Bench National Anthem Protesters! Do You Agree With Him?

Glad to hear that the Officers and hotel employees were unhurt. One less member of the “religion of peace.”

Under investigation? It was all on film and it is pretty obvious what happened. He charged the police officers with a weapon!!!

Not so obvious if you’re a lawyer and thus have legal perceptions influenced by a possible fee.

When do the muslims loot and burn the city down?

Thank goodness he didn’t have a plane or suv.

Or a functioning brain, apparently.

Not that it seems to matter, in the long run, but this behavior regulary exposes the Left for the shills, quacks, hacks, and fraudsters that they are. Heck…they don’t try to hide their corruption because they’ve learned they can get away with it. Maybe people will wake up.

Well that’s the end of that officer’s career. The officer did the right thing, but he did it in SAN FRANCISCO, where Muslim is a, protected, “race”. EVERYTHING that is just and fair is, “racist”, to Democrats.

If Amani had been relocated from Afghanistan to another Muslim country and not to the USA, he would likely be alive today. And the American taxpayers would not have been on the hook for his costs. But I guess Allah had these plans for him…

Hope the guy suffered before passing. Kudos to the cops.

Kind of stupid: “Let me see your hands” after being shot 4 times. He had a knife not a gun.

You say this confidently. But I guess it’s easy when you don’t know anything about what you discussing. But after the fact quarterbacking is easy isn’t it?

The cops, on the other hand, have it hard. “Let me see your hands” is a command used to make sure the person isn’t armed. Could have a gun, another knife or anything. Just ask a prison guard how many ways a person can use something as a weapon or have a weapon concealed.

Wouldn’t you want to make sure the person isn’t armed before you get close and render aid?

You didn’t notice how fast that happened? The fanatic might have had a gun and, besides, showing your hands is an indication of submission.

Islam, the religion of peace… or conquest?

Expect more. Lots and lots more. This will definitely not just be another isolated incident of a “mentally impaired individual”acting out of hand and being dealt with by a small group of inexperienced and unqualified, but well-meaning law enforcement authorities. This is a prime example of a community, city, state, and country that has failed to acknowledge the true lifelong millennium real cultural differences that can NEVER be changed, adjusted, or altered. The expectation of America has always been that all other outside nonwhite cultures can, will, and must “learn” to adopt “American ways”, American habits, and American thinking. Expectations are seldom the end product of reality and no amount of money, caring, dismissal, diversity, ignoring and time can ever overcome eons of such cultural and religious differences. Nature gave humanity Race to identify these differences and very intentionally divided the races to keep one from destroying the other. The blame does not lie with a mental disorder as is suggested; not even with the religious idea portrayed, but with the Race of the individual being in the wrong place at the wrong time.

Afghan interrupteur
mentally unstable and we have admitted thousands of these potential killers without any checks. Living on the dole too which is typical for a afghan..They are not assimilating in any country they are in.

Yet, on the other hand, the conservative media is always screaming about how sleepy Joe left thousands like this–interpreters and such ‘allies’–behind in the botched pullout. Trust NO media!

1400 years of a consistently violent history betrays the often repeated lie, that it’s a peaceful religion.
NEVER WAS OR WILL BE!

It’s more obvious than the Trojan Horse ruse. Darkly comical that twits on both sides of the house insist on projecting it as The Religion of Peace. Ulysses sure knew how mokes act.

And the intrepid chesa moves to indict both officers.

What the F are these ‘residential hotels’ and ‘city rented rooms’? You can see why so many shady businesses are now trying to permanently stiff the public with open borders everywhere.

Allah may be great but Amani is dead. Ooops!

Nice shootin’. Keep up the good work and stop apologizing to fruit cakes’ families for dumping the Alahoohoo Akbar trash!

wpDiscuz
29
0
Would love your thoughts, please comment.x
()
x
| Reply
Send this to a friend