We can’t confirm if this is a fake op, but a small group of people carrying Nazi flags and anti-Semitic material turned up outside the Turning Point Student Action Summit in Tampa, Florida, Saturday. They also were holding a picture of Florida Gov. Ron DeSantis and a DeSantis flag, although DeSantis would have nothing to do with such things.

Warning for graphic images and language:

Some Nazis showed up. Unclear if they’re serious or pretending — to try to claim conservatives support them so they can get coverage in left-wing media.

Without an exception, all the conservative attendees who came out were calling out their hate and telling them to leave. pic.twitter.com/L3qjdgSj1g

If I had to guess: this is staged. I just hope left-wing outlets don’t fall for this. pic.twitter.com/CuuAtaA3A6

Independent journalists Aldo Buttazzoni and Tayler Hansen confronted the masked-up psychopaths and challenged them to reveal themselves and their intentions.

Other TPUSA attendees called them out as well until they eventually left https://t.co/8tsZKcHZw2

The brief interrogation revealed that these vile demonstrators claimed that they had not coordinated with each other and had somehow all had the same idea to show up at the same time with photos of Florida Governor Ron DeSantis, antisemitic imagery, and Nazi paraphernalia.

These people are reprehensible. They said they all arrived without communicating with each other. It seems they are here to associate Ron Desantis and conservatives with their “beliefs”. Absolutely pathetic

Now, they may be real Neo-Nazis, but they had nothing to do with the event, and anyone who was at the event told them to go away. But, it does smell like an op, with the effort to smear DeSantis.

And you know they’re not conservatives, as they’re wearing masks, in addition to the fact that no conservative would support such sentiments.

Funny how the leftists were all over it and spreading it, as though it had something to do with the event and DeSantis.

Welcome to Desantis's America, where Nazis & Fascists get to roam free. #GTFOH https://t.co/3tCdbzOFHZ

Hansen referred to the operation as a “Fed Op.” And says that the flags are still creased implying they just purchased them.

“Currently a Fed Op taking place outside the convention center in Tampa, FL. All the flags are still creased implying they just purchased them, none of their stories line up and they continue to contradict themselves when questioned,” Hansen tweeted.

Currently a Fed Op taking place outside the convention center in Tampa, FL.

All the flags are still creased implying they just purchased them, none of their stories line up and they continue to contradict themselves when questioned. pic.twitter.com/ZDBeHiZetQ


Along with conservative media, TPUSA students and conference attendees shouted down the small group of so-called Nazis who quickly dispersed.

“They have nothing to do with TPUSA, our event, or our students. Our students took the mature route and vacated the space the Nazi flag holders were in. Once that happened, they left,” TPUSA spox Andrew Kolvet told the outlet.

Whatever was happening there, it stinks to high heaven.

It’s Happening! Republicans Introduced Legislation That Would End Sanctuary Cities Once And For All 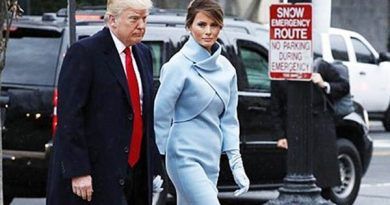 On A Busy Inauguration Day,Trump And His Family Still Attended A Church Service In St. John’s

Video: The Word Is Out On Biden In Kid Land As Joe Gets Smacked After Touching Little Girl – Watch The Reaction Of The Secret Service Agent In The Back

Yep! A fed op that is funded by using the dollars of American taxpayers. They double our cost of living and then use our tax dollars to harass us. Their problem is they just can’t shut us up. There is a right side and a wrong side, and these pathetic idiots, whose only purpose is to intrude, disrupt, and destroy will someday find themselves sitting in a jail cell. Hopefully, along with some well known names from the democrat party! I can hardly wait.

Lefties think people are stupid enough to believe this rot but the only who do are their fellow brainless wonders.

My guess is that the Feds are not directly involved. This looks to me like a cut out operation by an outfit with some experience doing this sort of work. Which group recently dressed five people in khakis and white shirts and gave them tiki torches to act like they were racists affiliated with a Republican’s gubernatorial (Glenn Youngkin) campaign? Why the Lincoln Project of course!

Should have beat there asses.

Must be a peaceful, spur-of-the-moment protest, eh?