Marlo isn’t sure she will ever be the same after what happened to her while leaving work in the middle of the afternoon earlier this month in Minneapolis. She asked us not to use her last name since her attackers are still on the loose.

It was Thursday, June 9 just after 4 p.m. when she walked outside to her car parked outside Tony Jaros’ River Garden on Marshall Street Northeast in Minneapolis. The 51-year-old has worked at the Northeast Minneapolis staple for the last 18 years. Two men in masks with their hoodies up were waiting for her.

Disturbing security camera footage shows what happened when Marlo went to open her car door. She spotted one of the men approach her with a gun and she shut the door before he could get inside. Marlo said his voice was muffled, but he told her to give him the keys to her Audi. She refused.

That man then threw her to the ground in the parking lot, cocked the gun, beat Marlo, and pistol-whipped her across the head. Marlo said it appeared the gun jammed. His accomplice then walked over. It’s when Marlo says the bar’s cook just happened to be outside on a smoke break when he heard the commotion and came to her rescue.

They all tussled on the ground before one of the masked men knocked her keys away and attempted to get into the car. Marlo again got up to stop them from driving off. A group of men from the bar also joined the fight and another man pulled up in a pickup truck to help.

The men all dragged the driver out of the car and onto the ground. The two thieves eventually ran off.

A group across the street also recorded as one of the attackers ran away on the sidewalk.

Marlo’s head was bleeding. She also has bruises to her hips, shins, and shoulder from the attack.

“It was the longest 30 seconds of my life,” Marlo said of the beating.

Her car windshield was also cracked, and review mirror ripped off.

She said the attack has changed the way she lives.

“I don’t walk out to my car by myself anymore,” she said.

She also used to clean the bar on Sundays alone and won’t do that anymore.

“This was my safe place,” Marlo said of her longtime workplace.

Tony Jaros’ River Garden is named after the former professional basketball player, Anthony Jaros, who played for the Minneapolis Lakers. The bar is also known as the home of the “Greenie,” a vodka drink.

As lifelong police supporter Marlo told Alpha News, it’s sad what Minneapolis has been allowed to turn into, as so few police officers remain on the force.

She also works at another Minneapolis bar and said just this past weekend there was an attempted carjacking there, too.

“Now you can know your surroundings but you’re still not safe,” she said.

Shortly after the attack, Minneapolis police found a sweatshirt with Marlo’s blood on it and a gun thrown about a mile from the scene of Tony Jaros’ in a nearby park.

“It keeps happening and they keep letting them go,” Marlo said, frustrated by the system.

The Hennepin County Sheriff’s Office is now handling the investigation. A spokesperson said it’s an open case and had no additional information to share at this time. 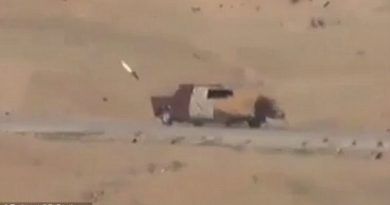 Screenshots: Local News Channel Posts The Results Of The Primary Election Who Should Be Held Next Week

Traitor John McCain Goes Too Far With His Hypocritical Message to President Trump. Immediately Get Shut Down! (Video)

Assault, battery, attempted murder. When do thugs like this get 30 years for such a crime? You want to stop crime? Build more prisons and fill them with these pieces of trash.

Arm yourself & train…it should be easier in even D’rat jurisdictions since SCOTUS is now on our side.

Get trained, get licensed, carry and kill them next time they try. It won’t take long before it stops.
Meanwhile….QUIT VOTING DEMOCRaT!!!

C’mon man! These dooches needed her wheels because they were late for a class at medical school. Taking their wanna-be ride was racist.

Only in Soft on Crime democrat run cities……………..vote them out this November….

You must be in a position to protect yourself first today. The cops will be there to literally pick up the pieces. Buy a gun, take a course in how to use it and be prepared. That could have been very easily your or your family. The courts and law enforcement aren’t your friends anymore.

Damn criminal niggers! When will these low IQ pavement apes stop with the crime? Need to shoot more of these evil criminals; send them all to hell! The pavement apes do no belong in a civilized white society.

The slimy thugs should have been shot on site.

Why was everyone dressed head-to-toe in white, even with white masks?

Bring your hunting knife to mark the thieves’ faces. (With the understanding that you were “in fear of loosing your life if you didn’t take action”.)

Hopefully with CC now legal (or about to be) in all 50 states, there will be a die off of these feral animals.

Gee, negroes in hoodies. I never would have guessed.

We have a problem race not a race problem.

Time to start shooting the pavement apes…..fuck this shit

That’s why everyone should carry. Those animals could have been removed from society.

wpDiscuz
21
0
Would love your thoughts, please comment.x
()
x
| Reply
Send this to a friend