In the wake of last year’s Black Lives Matter protests, Republican lawmakers are advancing a number of new anti-protest measures at the state level — including multiple bills that specifically make the drivers safer when a mob of protesters s trying to attack them.

Republicans in at least 25 states are pushing anti-demonstration laws that aim to protect drivers who hit protesters and make it far more difficult for arrested participants to be released from jail.

GOP lawmakers in Oklahoma, Iowa, Missouri, Utah and Florida have either introduced or already passed bills that increase penalties for protesters and provide legal protection for even potentially violent counter-protest measures. Nearly a dozen Americans were killed last year by motorists who drove their vehicles through protests in the wake of George Floyd’s death in Minneapolis. Republicans in Oklahoma’s State Senate last week passed an “intimidation” bill which grants immunity to drivers who hit protesters. Two additional pending proposals would make blocking a roadway a felony and allow state prosecutors to charge participants in “unlawful assemblies” under racketeering and organized crime statutes.

Multiple drivers who hit and seriously injured protesters last summer were never charged with crimes across several states, with Colorado prosecutors sparking controversy by refusing to even charge one such motorist with reckless driving. This includes a May incident in Visalia, California, where the driver of a Jeep, which had just hit two female demonstrators, drove to the local police station and reported the protesters for blocking traffic, according to the Fresno Bee.

“It’s not going to be a peaceful protest if you’re impeding the freedom of others,” said Oklahoma GOP Representative Kevin McDugle, author of the bill which provides both civil and criminal immunity to motorists who drive into crowds on roadways.

However, Connecticut is not one of the states that have this law!

A driver drove through a group of protesters in Manchester, Connecticut last night.

The group was partially blocking off a part of Center Street in Manchester when it all was caught on cell phone video.

Unfortunately, the police have no comment at this time because it is an open investigation.

Earlier in the day, there BLM 860 hosted a rally in Hartford, that focused mainly on the recent verdict in the Kyle Rittenhouse case.

They, and BLM New Haven, met up with Power Up CT and the Self-Defense Brigade in Manchester for another rally in Manchester.

We’re told at some point, part of the group moved over to the streets of Manchester.

Then, when the group was blocking off part of Center Street as an act of civil disobedience, a sedan with a Massachusetts license plate hesitates, and then continues driving into the crowd of protesters as they are trying to jump on his hood.

Manchester police Lt. Ryan Shea said the incident is under investigation. Shea did not confirm if there were injuries or the extent of them.

“As this is an open and active investigation, we have nothing further to release at this time,” Shea said in an email Monday.

This is what BLM is telling the media:

Ivelisse Correa of Black Lives Matter 860 said it happened at around 5 p.m. at a demonstration organized by Power Up Connecticut, where several organizations were protesting the Kyle Rittenhouse verdict.

Manchester police told Angelo Bavaro on Monday, “We are actively investigating the incident and there is no other information to release on it at this time.”

The group of about 15-20 people was blocking half of the road and would allow cars to pass during green lights when traffic was building up, according to Correa.

They were holding signs and chanting when the black car with a Massachusetts license plate drove into them with a man in the driver’s seat, Correa said.

She believes it was intentional.

“He was angry. It looked like he was looking for a reason and he found one,” Correa said. “You could tell in his face. The passenger was screaming bloody murder.”

Correa said about six people were hit by the car and four were injured, including a man who had his foot run over and a 60-year-old woman who was hit head-on.

Occupy Democrats are trying to bring the car driver to justice but they aren’t posting the video:

BREAKING: A Trumper “emboldened by the Kyle Rittenhouse verdict” plows into a crowd of peaceful protesters marching against Rittenhouse's acquittal in Connecticut, injuring 6, including a 60-year old woman who is now fighting for her life. He got away. RT TO HELP POLICE FIND HIM!

This is what Reuters has to say about plowing into protesters:

Deliberately plowing into a group of protesters could amount to a use of deadly force, and a driver-facing homicide charges arising from this scenario would need to convince a jury they acted in the reasonable belief that they had no other way to protect themselves from death or serious harm. 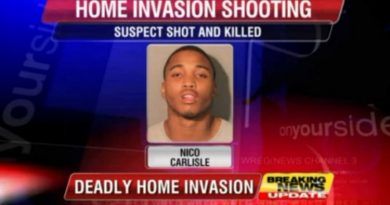 Start beating on my car? That’s what that pedal on the right is for.

There is a simple way to describe what happene…
Black male, driving a red SUV, plowed deliberatly into a crowd of people marching in a Christmas Parade…7 dead, many injured.
The video is all over the internet.
Watch it.

Or we could say it was mostly peaceful driving. . .

The headlines says “RAMMED.” The vehicle appears to have been stopped but then continued rather slowly on its way. This article or video headline is hyperbole.

Get out of the street and do your useless chanting elsewhere.

get out of the road

A “Trumper” did it? He looked angry? At least he didn’t chase you down and beat you with a skateboard. He didn’t sucker punch you. He didn’t push you in front of the subway. He didn’t burn your store, your car, or threaten to kill you. But, yeah, you bigoted, racist black it was a “Trumper.”

Pedestrians – GET OUT OF THE ROAD!!! Its a safety issue. I dont let my dog in the road…
DamnDominion.com #FJB #ExileSorosAgain #HangKenyanTraitors

Pedestrians – GET OUT OF THE ROAD!!! Its a safety issue. I dont let my dog in the road…
DamnDominion.com #LGB #ExileSorosAgain #HangAllTraitors

HUH?! I CANT understand you! WOULD you PUH-LEASE CAPITAILIZE ALL THAT????

Cars are bigger than people and can prove it. Shouldn’t stand in their way. Car violence is in vogue these days.

Driving through and “plowing into” are two entirely different things.

I thought my kids were dumb but every time I told them to go play in the street they would just look at me and say “yeah dad”. They are so stupid nowadays they do it without being told, lambs to a slaughter, baaaaahhhhhh baaaaahhhhhhh

There is no more need for any consideration with these “Peaceful” protests. BLM has already proven to take advantage of these situations to shoot people. They can protest on the side of the road, not the middle of it. The police need to pull their heads out of their butts and deal with these people the right way. But then comes the Judges and DAs who will not charge them or punish them. What is left? Gas pedal to floor and let the Darwin Awards ceremony begin!
Judged by 12 or carried by 6?

Well said. So many candidates for the Darwin Awards in the last several years. Those who play in the streets(mostly peaceful protestors) should expect to be placed on the lists to be considered for those awards. Really stupid to stand in front of a vehicle and expect to live beyond the next few minutes. Parents of these blm/pantifa folks must be really proud of them.

Stay out of the fkn road.

They LET traffic go by? Who the f__k died and made them king?

Once again, it’s the media, the msm, stirring the pot and creating conflict with intentional inaccuracies and overt blaming.

Did they have a permit to block that road and impede traffic? If not, they were breaking the law and thus were not peaceful protesters but criminals. If anyone should have been arrested it was the criminal protesters.

Says it all. The Bell Curve explains it.

Oh, I see. The driver was kind enough to slowly push them away before speeding off. What’s wrong with that?

If your going to stand in the road, you might get hit by a car. Here’s your sign!
Back to your mom’s basement or under Omar’s turban, whatever! Say hi to her brother

Good move – need more of that!

Get the hell out of the damned road, you freakin idiots — no matter what you panty-fa goofs are butt hurt about.

Don’t look like nobody was hit. Case dismissed! Next!

Looks like street justice to me. Maybe the FBLie can spare some of the 34,000 agents who are currently pursuing mothers at school board meetings to investigate.

wpDiscuz
41
0
Would love your thoughts, please comment.x
()
x
| Reply
Send this to a friend