After the storm of “epic proportions” torn Texas, a lot of people and companies joined and did their best in an effort to help all these people in need. The proud Houstonian and UFC heavyweight star Derrick Lewis didn’t turn his back and stepped in to help the community.

He stated, “I’ve always been that type of guy that I like to help people more than I like to help myself. And so I just seized the opportunity. The police, they kept getting on the news and saying that they’re not going to help any one unless it’s a life-or-death situation. Basically, the firefighters said the same thing.”

This good hearted man risked his life trying to help anyone in need, including one desperate man who would not leave without his Confederate flag despite the waters around him kept rising.

“I picked up one guy and his family, his wife – he just kept apologizing to me, because all he really had was his clothes, and he wanted to take his Confederate flag.”

“He wanted to take that with him, and he just apologized and said, ‘Man, I’ll sit in the back of your truck, man. I don’t want to have my flag inside of your truck like this.’ I said, ‘Man, I’m not worried about that,’” Lewis said.

“He’s saying, ‘You never know if you ever need someone, so …’ – I already knew where he was going with it. I just said, ‘Don’t even worry about it. It’s OK. I don’t care about that.’ His wife kept hitting him and saying, ‘You should have just left it.’”

Even though liberals were working hard to divide our country by race we are united! This is as it should be! An American helping other Americans. This is what we are about! No politics! Just people of every race and creed helping each other. Bless them all.

This is what everyone should do. Come together and help one another. This is a time that we need to all unite together in whatever way that we can help. We are all Americans!

What do you think? Share this article if you liked “The Black Beast” gesture!

An Obituary printed in the London Times… 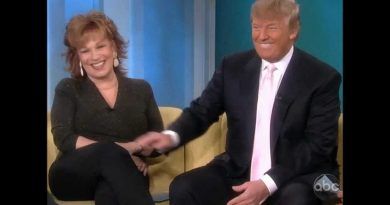 Every master of incitement knows that facts make poor fodder for inflaming emotions.
Facts are objective statements about reality, like “Joe tried to sell us a used car with cracks in the engine.” No one disputes facts, which is why they’re called facts, so the power they have for making people angry is very low.
Facts are absolutely toxic to hatemongering: avoid them at all costs!
Nonetheless, by subtly modifying a fact, you can turn it into a partial truth, which can incite far more hatred than a complete falsehood. Indeed, the majority of all inflammatory language achieves its sting by masquerading as fact.

This is not anything that should make the news. This is America. We have Freedom of Speech, Religion and we have the right to believe as we want. The Confederate Flag does not just stand for slavery, it stands for reminding us of what happens when a Nation Divided, like we are today and cannot come together to find an answer to that Divide. This good black man understands that I feel sure, knows that not all who show this flag are bad and did more for Race Relations in this one act of kindness and mercy and compassion using common sense not emotion, that millions across this country could ever do.