A jury has found a former police officer guilty of murder over the death of African-American George Floyd on a Minneapolis street last year.

He will remain in custody until he is sentenced and could spend decades in jail.

However, before the decision was made there was a huge tension in Minneapolis where a mob of BLM extremists in Minneapolis has been caught on tape chanting “if George don’t get it / burn it down” ahead of the verdict in the trial of Minnesota cop Derek Chauvin, in yet more evidence that the modern left is fundamentally opposed to the rights of due process and the rule of law.

The shocking scenes come less than a day after Judge Peter Cahill branded as “abhorrent” comments made by congresswoman Maxine Waters encouraging protesters to “stay on the streets” if Chauvin is acquitted, after a week of violent and criminal left-wing riots.

This domestic terrorist needs to be arrested!! pic.twitter.com/9YuK7dcj1C

Incidents were reported even after the verdict was released, a video revealed a BLM crowd that surrounds a truck in Minneapolis, shouts “disconnect the trailer” and attempts to break the windows”

BLM crowd surrounds a truck in Minneapolis, shouts “disconnect the trailer” and attempts to break the windows” pic.twitter.com/ya8Fwh4kVE

It seems that the idea called Antifa and the BLM are not peaceful as the mainstream media describes them, they also seem more organized too as a video that surfaced right after Derek Chauvin was found guilty on all charges shows a huge free money giveaway to BLM rioters following the Derek Chauvin trial.

The question remains if this was a free giveaway or it was just a scared business owner who decided to give them money so he can get his business safe?

The death of George Floyd in May last year galvanized the Black Lives Matter movement, making it a household name around the world and raising millions for an organization that many had never heard of before.

But as people rushed to support the cause, horrified by Floyd’s killing and other instances of racism in America and beyond, cracks began to appear in the organization that, in the last 12 years, has reshaped much of the country.

When it first launched, BLM sought to bring attention to and prevent police violence against African Americans.

Over the last 12 months, troubling truths about the organization have emerged including its ties to convicted domestic terrorist Susan Lisa Rosenberg, who was part of the May 19th Communist Organization that wanted to overthrow the government in the 1970s and 1980s.

There are also questions about the organization’s opaque financials.

One of the organization’s founders, Patrisse Cullors, tearfully defended owning multiple homes worth a combined total of $3million after questions arose over how she paid for them.

She insists she’s never been paid by the charity branch of the organization, but has received $120,000 from the movement between 2013 and 2019.

WATCH! Stevie Wonder And Beyonce With A Disgusting Attack On President Trump During Hurricane Telethon…Immediately Get Shut Down! 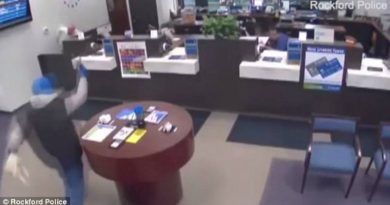