When the liberal agenda comes before your children: when liberal teachers put politics ahead of your children; when teachers indoctrinate your children into liberal ” group think”, it’s time to start handing out pink slips.

In honor of National Read a Book Day, our First lady Melania Trump decided to donate Dr. Seuss books to schools across the country with programs that achieve “high standards of excellence”.

Sadly, some people will do anything for a 5-minute fane! One elementary school librarian decided she won’t allow this so she put her politic views before her students’ needs. She refused the donation of books made by our First Lady.

Liz Phipps Soeiro, a librarian at Cambridgeport Elementary School in Massachusetts, reject the donation from our first lady. Not only this! She did something disgraceful by insulting Melania Trump in a letter, implying that her choice of books were “racist”.
A person who disrespects a gift from the First Lady is very crass and extremely rude! With her gesture, the librarian showed disrespect for the school and the students.

Ms. Soeiro wrote: “You may not be aware of this, but Dr. Seuss is a bit of a cliché, a tired and worn ambassador for children’s literature. As First Lady of the United States, you have an incredible platform with world-class resources at your fingertips.

“Another fact that many people are unaware of is that Dr. Seuss’s illustrations are steeped in racist propaganda, caricatures, and harmful stereotypes,” she added.

Not only she refused the donation and insulted our first lady, the librarian had the nerve to suggest other 10 children’s books
that would open Mrs. Trump’s eyes to “the lives of the many children affected by the policies of your husband’s administration.”

Cambridge Public Schools has since responded, sending this statement to CBS: “In this instance, the employee was not authorized to accept or reject donated books on behalf of the school or school district. We have counseled the employee on all relevant policies, including the policy against public resources being used for political purposes.”

She obviously cares more about getting attention than her students! Shame on her for disrespecting a gesture of love for children

This is so sad. The school isn’t a place where you should express your political opinions. The librarian should pull herself together and accept the books. She should have act like a grown-up woman, like an educator and brought a positive light.

Sadly, her gesture just shows us that some people can educate all they want. But that doesn’t mean a lot in the real world where getting along with people is a lot more important than waiving with your diploma.

What do you think? Scroll down to leave a comment below.

Melania Trump Announces That The First Family Will Be Funding Their Own Personal Vacations! 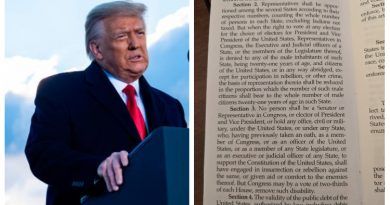 Teachers are supposed to be unbiased while “on the clock”. This is an outrage. Luckily, the school district didn’t stand behind her decision.
I would not want any one like this teaching my kids anything..nor any kids.

And what did idiot accomplish?

What a crude, cruel and impolite thing to do. No respect. No manners.

I want to apologize for those Americans who have not given our President a chance including those News stations that continue to report only partial news stories or portray Our President in a negative way which goes back to partial news stories. It is a shame because I totally believe that if President Trump was given support by his staff, congress, senate, etc. he would be able, in time to make America Great again.

You guys are some insane folks. The end