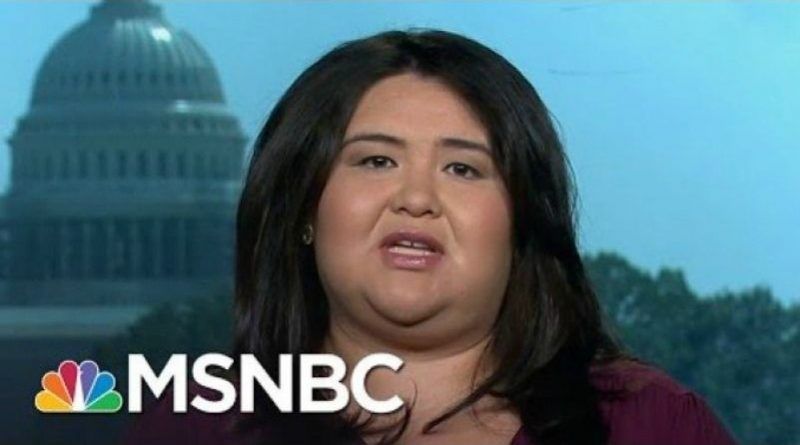 One of President-elect Donald Trump’s most oft-repeated promises on the campaign trail was that he would make our country great again and he will deport millions of illegal immigrants who were living in the United States. Now, that Donald Trump is the president-elect, it’s clear that he is wasting no time to put that plan into action.

But as you can guess, those illegal immigrants are not so happy because of this.

Greisa Martinez, the director of the United We Dream Network, appeared on MSNBC to tell America that Republican President Donald Trump is “a threat to the way of life in our communities.” During the interview, she stated that President Trump’s policy of deportation of millions of illegal immigrants is a concern to our country!

Martinez said: “For people like myself that are undocumented and have undocumented family members, it’s been clear from day one that he wants to enact mass deportation. He wants to deport me and my mother. That is crystal clear for all of us. But this in and out and softening or not is just erratic behavior and concerning to our country.”

“As someone whose father was deported eight years ago, I understand the pain that brings to communities. But Donald Trump wants to make something that’s already bad and toxic and make it worse. He has promised to increase the force by triple in the community. He has promised to deport people like myself and my families and U.S. citizen children along with them. So I think that Donald Trump is a threat to the way of life in our communities,”- she added.

I don’t understand how so many people, who have lived here illegally for many years, are now so irate and upset that illegals have to go home. Why didn’t you do anything about getting your documents in order all those years? You violated your temporary visa if you even had one, and the laws of our country. It’s just not the way it works. Makes me annoyed to hear so much nonsense by offenders of our laws.

We have news for her. The majority of American voters sincerely hope that President Donald Trump will threaten her life all the way to deportation. They will vote for Trump in 2020 so that he can finish the job.

Thanks for pointing out you are undocumented. Guess what you have won an All expense paid trip back to where you came from.

What do you think? Share this article with your friends!

Karen Pence Had Her Private Email Address Published In An Article By The AP.

What CNN Did After Antifa Complained, Shows Once Again CNN’s True Colors..

The Mormon Tabernacle Choir Will Be Performing At The Inauguration Ceremony.

deport this foreign, fat, ugly, disgusting tub of s*** and her parasite/wetback/illegal alien of a mother.

I agree let her go back to where ever she is from, let her pay for the tons of food she eats, complaining about America usually stops then, we have enough cows in usa, but at least our cows contribute

She said she was proud of her country. Her country is NOT America. She stated she was undocumented an illegal and her Mother. Another case of welfare fraud and she is a Dreamer, we paid for this illegal to go to college, free. WTF
DEPORT HER AND HER MOTHER IMMEDIATELY. When they repay all the monies and benefits they received FREE, then they can apply to enter America legally.
There are thousands of illegals from all nations committing welfare fraud and paying no State or Federal taxes or they file false taxes and get a rebate. UNBELIEVEABLE, WAKE UP AMERICA THE LIBERALS ARE DESTROYING OUR GREAT NATION.

You are illegal here in the United States. You do not have a community here and should have been deported by now.

A News Flash…At least half the country wants President Trump to honor his word to build the wall and deport ALL Illegals from our country. He’s doing what we the People hired him to do. So come to our homes and complain if you dare.

A threat to sneaking across the border illegally?

This is a broken record! I suppose the word “Legal” and “Illegal” doesn’t matter. Nothing saying there are good hardworking people that are here illegally and would make great citizens! We have citizens that feel it is their right to not support themselves and defraud the system by receiving payments from the government because they feel it is also their right! Now we have people that work, generate income, pay their taxes and social security so they can receive benefits when they get to the age of retirement! Now, if individuals pour into the United States, without going through the process that is deemed necessary to become a citizen because they have have that right, it takes work to become a citizen, not just moving a family to our country! Now all this money, time and effort to correct this problem, which some feel that “Sanctuary” means you can bypass laws and everything is alright! You all should also be held in contempt for enabling the breaking of federal law!

Mess up their way of life????? Yes, the free food, medical, education etc. If they want to revolt, then they should go back to their own country and start there, make changes there and they will not have to come here. But, no, come here live high on the hog and then bitch,bitch,bitch. The media needs to take some of these folks into their homes and take care of all their needs so we do not have to have them on the roles. But as with everyone, they want all to come here but do not want to open their homes to them. So tell the media to suck it up and take them home with them.

Plz cut the bull shit u want to come here use the legal proper procedural process American families struggling just to put food on the table , pay for our children’s college while u get it for free how many of our people are homeless our taxes go up to provide illegal immigrants free college education,housing shelter what do u think just hop over a fence and the Americans will take care of u while our own families and people are desperately struggling our country is so far in dept we pay the price for your free ride while our soldiers and veterans and American children are homeless starving in need of medical care … even our animals and animal shelters,,,we’ll let the last free ride be a deportation bus get the fuck out come in legally or don’t come in at all soooo pissed how dare u the reality is u illegal immigrants by the thousands are messing up our way of life u r messing with our children’s futures we the American people don’t owe u illegals immigrants nothing we have made enough scacrafices it’s time to take care of our own if u r illegal get the fuck out use the proper channels instead of sneaking in sooo pissed

That is why I voted for him, to get you illegals deported. You come here, sign up for welfare and all the free stuff you can get, incade our social security by applying and getting an award to collect, its no wonder you hate him he is taking away the free money you came her for. You are an illegal, go home, FU, I worked my whole life in this countey since Im 15 and never collected nothing , I worked and paid my way, paid my taxes. Get the hell out of my countey. Your not here to work for America, your a parasite bleeding our resourses,

She & all the ILLEGALS “NEED” to be DEPORTED! I’m so sick & tired of footing the bill for these people, aren’t you?

She refers to the USA as our country. It is not her country she is not documented. I can not believe the liberal media even put this on TV. It is my tax dollars that is most likely feeding 3/4 of her family if not all of them. Deport this looser cry baby she can go back to her home country and try and make it better for blood suckers like her. NOT ON MY DIME IF I HAVE ANYTHING TO SAY ABOUT IT……….
GO TRUMP! MAKE AMERICA AND LEGAL AMERICANS GREAT AGAIN.

Her “As an undocumented citizen…”

Me as the interviewer “Hang on please, I have an important phone call to make.”

Me “These are ICE agents. Where did you say your family lives?”

why did you get your citizen ship before. well you didnt that make this problem yours not ours . we are responsible for your failures. you broke the law by coming here, and we are tired of paying for you. you created the problems that you have, and they problems that your children will have. not us. we did not ask you to come here. but we are also not asking you to leave. we are telling you to get out. and we are going to throw you our. get your papers and you can come back till them get out.

As a veteran, I didn’t fight for all illegals to wreck our Country. You want to whine? Great! How about we American Citizens escort you to the boarder. And toss your asses over the fence. Oh, sorry you got caught in the barbwire (not!). News flash. Your illegal status gives you no rights at all.

Go on a diet you nasty biotch and leave this country!

cry me a river get out of our country”

This woman and her family should be first on the deportation list. Commit a crime and then whine on T.v. about losing your free ride. Hurry President Trump , I want to cheer on the deportation buses. Please start in California, we badly need some relief.

Lady you should be deported, My God you must eat the food for 4 people, depriving them of their health and life. It is people like you who are hurting our country.

Lady, you broke the laws. Get over it. What you and your family did is illegal. Quit blaming Trump. You talk like you think you’re a citizen. YOU’RE NOT. Leave our country and come back when you can do so LEGALLY. Stop whining. Stop complaining, and be responsible. You should be deported. Trump is just doing his job. We can’t pay for all of you illegals. Accept your responsibilities and go home and do it the right way.

wpDiscuz
22
0
Would love your thoughts, please comment.x
()
x
| Reply
Send this to a friend