The Bible doesn’t lie, “if you faith the size of a mustard seed you can say to this mountain be removed” God answers prayers for sure

A small congregation in the foothills of the Great Smokies built a new sanctuary on a piece of land willed to them by a church member. Ten days before the new church was to open, the local building inspector informed the pastor that the parking lot was inadequate for the size of the building.

Until the church doubled the size of the parking lot, they would not be able to use the new sanctuary. Unfortunately, the church with its undersized parking lot had used every inch of their land except for the mountain against which it had been built. In order to build more parking spaces, they would have to move the mountain out of the back yard.

Undaunted, the pastor announced the next Sunday morning that he would meet that evening with all members who had “mountain moving faith.” They would hold a prayer session asking God to remove the mountain from the back yard and to somehow provide enough money to have it paved and painted before the scheduled opening dedication service the following week.

At the appointed time, 24 of the congregation’s 300 members assembled for prayer. They prayed for nearly three hours. At ten o’clock the pastor said the final “Amen.” “We’ll open next Sunday as scheduled,” he assured everyone. “God has never let us down before, and I believe He will be faithful this time too.”

The next morning, as he was working in his study there, came a loud knock at his door. When he called “come in,” a rough looking construction foreman appeared, removing his hard hat as he entered.

“Excuse me, Reverend. I’m from Acme Construction Company over in the next county. We’re building a huge new shopping mall over there and we need some fill dirt. Would you be willing to sell us a chunk of that mountain behind the church? We’ll pay you for the dirt we remove and pave all the exposed area free of charge if we can have it right away. We can’t do anything else until we get the dirt in and allow it to settle properly.”

The little church was dedicated the next Sunday as originally planned and there were far more members with “mountain moving faith” on opening Sunday than there had been the previous week!

The mountain- moving lesson here: Faith is not the absence of doubt. Faith is the presence of belief!!

Colin Kaepernick Most prolific “coach killer” In The NFL 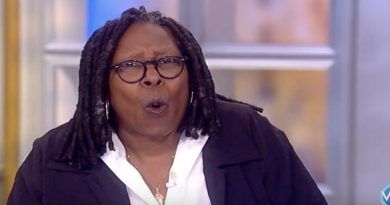 Faith truly does move mountains, Just pray and the mountains will move!