​Former President Donald Trump will close out the ​Conservative Political Action Conference today with his first public address since leaving the White House on Jan. 20.​

The former president was scheduled to take the stage at 3:40 p.m. Sunday but the speech is now moved to 4:55 EST.

But as Trump is getting ready to start his speech Ian Miles Cheong tweeted that CPAC’s website is being DDOS’d.

On CPAC’s Wikipedia page their official website is https://cpac.conservative.org/ which at the moment is not accessible. You can still watch the speech on CPAC’s alternative website but it seems that the alternative site has some issues.

A distributed denial-of-service (DDoS) attack is a malicious attempt to disrupt the normal traffic of a targeted server, service or network by overwhelming the target or its surrounding infrastructure with a flood of Internet traffic.

DDoS attacks achieve effectiveness by utilizing multiple compromised computer systems as sources of attack traffic. Exploited machines can include computers and other networked resources such as IoT devices.

From a high level, a DDoS attack is like an unexpected traffic jam clogging up the highway, preventing regular traffic from arriving at its destination.

DDoS attacks are carried out with networks of Internet-connected machines.

These networks consist of computers and other devices (such as IoT devices)which have been infected with malware, allowing them to be controlled remotely by an attacker. These individual devices are referred to as bots (or zombies), and a group of bots is called a botnet.

Once a botnet has been established, the attacker is able to direct an attack by sending remote instructions to each bot.

People online reacted and even asked the FBI to get involved:

Then likely RSBN’s and Newsmax’s will be, too, when Trump speaks, hear C-SPAN is also airing https://t.co/mG19j2SWdF

This news is still unconfirmed but we will update the story as soon as we have more news about this alleged attack. 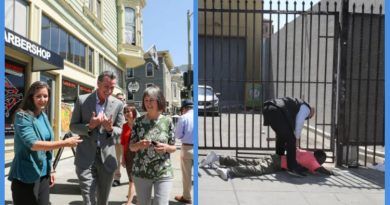 Karma – Newsom Attacked In Oakland By A Homeless Man (Video)

[…] As Trump was getting ready to give his speech, CPAC’s website was being DDOS’d. […]